Friends of the Loop grew and donated about 150 pounds of produce that was donated to the food pantry on Tuesday in a community effort called "Nourish your Neighbor ." 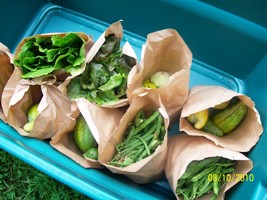 The idea was that of Ed Merians, Larchmont resident and Chairman of the Red Cross of Westchester. We received support from Sheldrake Environmental Center and Farm Share .

Last night Ed brought a crate which had veggies for about 35 families. Beautiful stuff. The talented Sheldrake gardeners also brought veggies for about 30. Then Ed returned today with several more boxes of produce. Everything donated quickly found homes, and our clients were very appreciative to have such nutritious and fresh food that was grown with love.  Thank you all again and again!

In addition to my stuff I received at my house 1 shopping bag with at least 20 pounds of produce. I also received the Farm Share contribution of 8 boxes that included 10 pounds of cucumbers, 15 pounds of summer squash and zucchini, 12 pounds of peaches & plums, 8 pounds of heirloom tomatoes, a box of kale. I added my box from Farm Share too, but kept the yummy oriental melons since they would be too hard to explain how to eat but let’s keep that our little secret.

My count….about 8 cucumbers. Should have lots of tomatoes next go around.

Produce is always welcome at the Food Pantry. Contact us if you need help getting it there. And thank you to all of you whose names we didn’t mention!!!