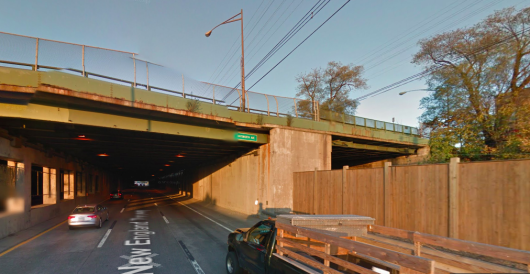 A woman suffered eye and facial injuries when a piece of concrete smashed through her windshield while driving on I-95 in Larchmont with her husband.

“I thought I was going to die. That just came through my head, ‘I’m going to die,'” said Mrya Flores’ the accident victim.

On Saturday afternoon a routine car ride turned horrific when a slab of concrete came flying through the passenger side windshield of her car.

“I thought my eyeball had come out of the socket. I was literally holding my face and my face was on fire,” Flores said.

Tuesday, crews could be seen working near where the accident occurred; the Chatsworth Avenue Overpass on the New England Thruway in Larchmont.

A small piece of concrete was left in Flores’ car that fell from the structure.

Flores’ husband was driving and managed to pull over.

“I still have debris inside my eye. They removed what they could but I still have some inside, and I have two scratches in my cornea,” Flores said.

The reason for concrete coming loose is still unknown, Flores says highway workers at the scene cited the age of the bridge and the rough winter.

Regardless of the cause, the mother of three says she’s thankful to be alive and glad her children were not in the car.

“I just don’t want this to happen to anyone else, such a trauma,” Flores said.

Dan Weiller with the Thruway Authority released a statement saying, “We had staff on site immediately following the report of an incident under the bridge on I-95 in Larchmont on Saturday, to ensure this section of roadway is safe. The bridge was found to be structurally sound in its last bi-annual inspection, but was impacted by severe winter weather like many roads and bridges across the state. Safety is the Thruway Authority’s highest priority. Therefore, in an abundance of caution, we are accelerating the next scheduled inspection of the bridge. The Thruway Authority will also be conducting supplemental risk-based inspections of bridges throughout the system in the coming weeks.”