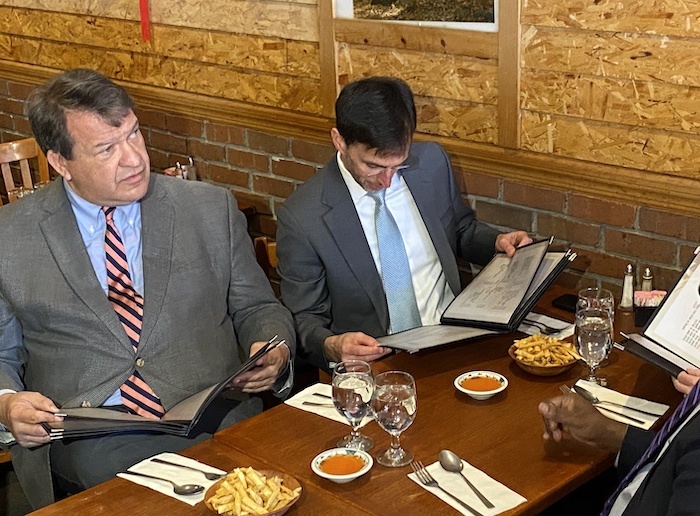 Their stated goal was to “lift up the residents and businesses that are bearing the heaviest burdens,” from exposure to coronavirus, according to Bramson.

Though, of course, there’s always someone acting ugly.

Wykygyl is the home of Young Israel, the Orthodox Jewish Temple where Lawrence Garbuz is a member. On Wednesday, officials revealed that nine people linked to Garbuz, who lives in New Rochelle, tested positive — and some 1,000 people were asked to self-isolate. They include his wife, two of his children and several neighbors.

“Events like this one can cause stress and anxiety which can lead to biases against those of specific ethnicities or countries of origin,”  Latimer said.

Larchmont Temple sent a letter this week urging its 800-family congregation to take precautions, including “rubbing elbows instead of shaking hands, etc. to minimize the transmission of germs.”

“People think it’s Armageddon and they’re never going to leave their house again,”  Josh Berkowitz, the owner of Eden Wok, told the Post. Many of his customers are quarantined to see if they develop symptoms of the virus. His employees have been making deliveries, setting the food outside without coming into contact with the people behind the front door, the paper reported.

Schools in Hastings-on-Hudson are closed “out of an abundance of caution” for sanitizing. A parent in town may have had contact with the New Rochelle synagogue linked to several confirmed cases. Schools in Mount Vernon are closed too.

In New Rochelle,  Schools Superintendent  Laura Feijoo said, “We are aware that some neighboring school districts have closed in order to sanitize schools in response to the Coronavirus disease COVID-19, and that anxiety levels are high.

“Based on information we have received, and on input from medical professionals, the city school district of New Rochelle has decided not to close our schools.