Will Anna Maria Get Cut (again?)

Said her publicist, “Anna Maria did an outstanding job.  She went to the very end but unfortunately did not win the competition.  Although we all think she was the winner.  She injured her finger from the start but worked around it to get to the end of the competition.  She basically was cooking with one hand.”  Congratulations!

The teaser for Tuesday night’s episode of “Chopped” on the Food Network is intriguing: 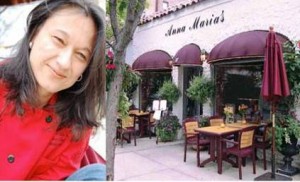 “In the midst of preparing her trout appetizer, a feisty chef faces a big set back. Then in the entrée round, the competitors have a heck of a time cooking deckle of beef, and one chef’s behavior brings up safety concerns. Then fighting it out for all the marbles, the two finalists find marble-sized coconuts in the dessert basket. Will they know what to do with coquitos?”

Well if anyone knows, it’s Anna Maria Santorelli of Anna Maria’s Restaurant in Larchmont. And she is one of the competitors in tonight’s (10 pm Food Network, ch 29-cablevision) competition! In fact, she was the one with the “set back,” a badly cut hand, but we hear she carried on in her usual optimistic, determined style.

Chopped “challenges four up-and-coming chefs to turn a selection of everyday ingredients into an extraordinary three-course meal. After each course, a contestant gets “chopped” until the last man or woman left standing claims victory. ”

I saw this episode late last night and was shocked to my core. Anna Maria literally cooked all of the meals with one hand – and the judges continued to let the immature, dishonest, and trash-talking wannabe chef slide onto the end. The judges never condemned him for his unsafe habits, rude behavior, or constant dishonesty about what was going on. He even insisted he would be unapologetic about his habits. And this idiot actually “WON” the competition? What is Food Network saying? What are the judges saying? That “chef” even claimed to be a teacher! What is HE teaching his students when they watch him on television treat people and competitions the way he did?? I was disgusted!

With great perseverance and great performance, she came in second. Congratulations to our own! Wait till next year!

Now why are the VOL and the TOM restaurants so under-participating in the Hudson Valley Restaurant Week? Yes, Westchester is included.

Our own “star” restaurant, claims about our other excellent restaurants, and cries for people to “shop” our business districts. Possible increased sales tax revenues from those who discover the restaurants and possible increased business district property tax revenues. An opportunity being missed, or are we too “elite”? VOM has some participants. Scarsdale has some participants. Perhaps there’s time to turn this around.