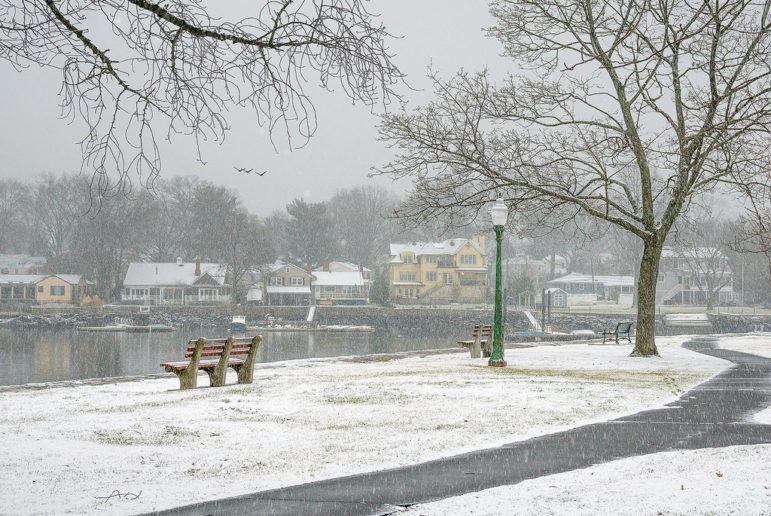 Clean up and power-recovery efforts intensify Thursday morning following the second Nor’easter in a week; thousands remain without power, some who still didn’t have from last storm, others who just got back lost again.

In Mamaroneck, a neighborhood was evacuated due to a live downed power line at Keeler and Florence Ave.

According to LoHud, the company’s Westchester outage summary on its website, with town-by-town breakdowns of outages, has not been working since Wednesday morning. As of Thursday morning, according to a spokesman, 27,800 Westchester customers are without power.

6,500 Con Ed customers who are still without power from Friday’s nor’easter are expected to have power back by 11 p.m. Friday. The company’s customers who lost power during Wednesday’s storm do not have an estimated restoration time yet, he said.

Optimum customers, many of whom had no internet and cable access since Friday, saw restorations Wednesday.

Westchester County Executive George Latimer  called for the heads of Con Edison and NYSEG to resign, “in light of the inadequate and troubled response…” to the nor’easters to hit the region during the past week.

Latimer called for Con Edison Chairman John McAvoy and NYSEG President Carl Taylor to step down in a posting on the Westchester Government Facebook page shortly before 1 p.m.

Well, I can see that the idiot Latimer is well on his way to becoming yet another low-life, pandering Democrat slug. Just for the record, I call on *him* to resign. Just for being a slimy opportunist little brat.

What?! I’m glad Latimer is looking out for us. ConEd’s response and terrible miscommunications are inexcusable. 4 times we were notified that our power had been restored when it hadn’t, then we found out we weren’t even on the schedule despite many neighbors notifying them numerous times. The fix turned out to be quite simple so they obviously weren’t doing any kind of triage. This isn’t the first time, either. Our local politicians like Nancy Seligson are the ones getting things done! Thank you to Nancy, especially, and George!

I’m no fan of Con-Ed, but remarkable as it may seem, they don’t control the weather. I understand a large number of their resources are still tied up in Puerto Rico. If they hadn’t sent help there, no doubt they would be criticized for that. Now that they did, and are short-handed here, they are criticized for that. But regardless, no one is perfect and I know that many hard-working people were out there in the middle of that storm (both of them), working their butts off. I’m sure you were, too, right?

Many people around here have an over-inflated sense of entitlement. That’s putting it politely. Shit happens. And for responsible adults, that’s just that. We deal with it. But for the whiners and spoiled brats of the world, it’s just another opportunity to blame someone, and seek something for themselves out of it. And for slimy politicians, it’s just a perfect time to get in front of the media and make a lot of stupid noise.

That about sums it up.

J. Mark is absolutely correct. The politicians are just grandstanding to make it look like they’re watching out for you, but the utility companies are out there doing their best to restore service as quickly and as safely as possible. Meanwhile, they’re all laughing at the politicians calling for their head while they eat storm pizza back at headquarters.

Their priority is to restore power to hundreds at a time rather than one single house at a time, so unfortunately, you have to be patient when a major storm strikes your area. I had no power for a week when Hurricane Sandy struck, but the utility companies have been diligent trimming trees in the area and we haven’t had a problem since, knock wood.

What I would do, if I had any large, old trees on my property, is have them inspected and have them trimmed or cut down. I know it costs thousands of dollars to have trees cut down and removed, but it’s better than having it crash down on my house, car, and endanger the lives of myself, my family, and my neighbors.