To the Editor: Weaver Bridge: What’s Up? 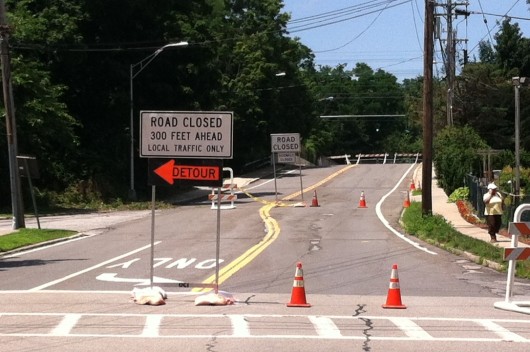 (note: in a subsequent article, we get some answers.)

To the Editor:
Do you have any scoop on the Weaver Street Bridge plans?  Living right at the Harmon Drive closure, I can give readers a scoop on the activities to date.

Workers showed up around June 4th to set up closures.  They worked for a couple of days, seemingly only on barricades.  I have seen not one worker actually work on any part of the bridge since the closures.  Its been a month now!  Worker(s) show up daily on Harmon Drive to put the temporary blockades back in place and have added more temporary features to the blockades to prevent the numerous daily take-downs by those who think they may still be able to get through.  Traffic down Harmon has slowed a little bit but we still see numerous daily turnarounds in the Girl Scout house (thats my NASCAR fan son waving the “Penalty!!” flag at you!)

But here is my concern:  the project is slated to take “60 to 120” days.  Reality is that if they CAN take 120 days then they WILL take 120 days.  And since actual work has not yet begun…does this mean that they have 120 days from the time that they actually DO begin working on it?  The start of the school year is going to be a nightmare.  With the new updated schedule at the Hommocks, it looks like ALL the schools will let out at about the same time.

Traffic and tempers were bad to begin with but I REALLY dread start of school this year with Weaver still being closed.

Looking forward to a Loop Scoop on what the plans are for this potential migraine.

“What we can’t do today, we do tomorrow”

What’s the over/under spread on Thanksgiving?

That bridge will still be closed at Christmas, I guarantee you. Can you spell “unions”?

I have yet to see any progress on this construction but the inconvenience of the road closure is a taking a huge toll on our lives. We live on the other side of the Weaver bridge are cut off from town, the bank, the grocery store, the gym and work and have to drive a huge circuitous route through traffic to get anywhere. I believe we should get a tax refund for the extra time, gas and stress this is costing us.

Really? These are small problems, there happens to be real suffering in the World. Besides having to drive 5 minutes extra to get to the gym SMH………