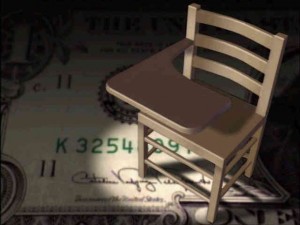 According to results released Tuesday night, 1,771 individuals voted in favor of the budget and 663 voted against it.

The .84% property tax increase to fund that increase will cost the average homeowner in the district about $126 more per year. It is the lowest tax rate increase in more than 40 years, according to the district.

On the school board, Stanley Futterman and Ann LoBue were elected to three-year terms in an uncontested race, to fill two seats being vacated.

Futterman is a Larchmont father of three boys who attended the Mamaroneck public schools. He is principal of the Law Offices of Stanley N. Futterman and has served as a board member of the Friends of the Larchmont Public Library.

LoBue is co-president of the Murray Avenue School PTA, where her daughter attends fourth grade. A resident of the town of Mamaroneck, she works as a writer and communications consultant, and previously managed corporate marketing communications for financial institutions including Goldman Sachs.

For a complete look at the budget, visit the district’s website.

In Rye Neck, voters passed a budget of $38 million, a 2.79% increase over last year.   Rocco Germani and Deborah Aulfinger  won uncontested elections to the school board.

In the Rye City School District voters went to the polls yesterday and cast their ballots on the adopted 2011-2012 Budget and two candidates for Board of Education.

The Budget passed, with 868 residents voting Yes and 419 voting No.

Both candidates for Board of Education ran uncontested. Karen Belanger received 1,077 votes and Edward Fox received 1,023.

“I would like to thank the Rye City School District community for voting in support of our proposed 2011-2012 budget,” Board President Josh Nathan stated. “This budget will enable us to maintain our educational program and provide quality resources and facilities for a student population that continues to grow.”