Called “Hudson River Explorers,” and inspired by region’s flora and fauna, the oil paintings originally were commissioned by MTA Arts to be installed as eleven laminated glass windows in the overpass corridors at the Metro-North Railroad Tarrytown Station. They also were exhibited last summer at the Hudson River Museum.

Artist Holly Sears  has always been motivated by “the mystery and amorality of nature.” She writes:  “I did extensive research on the plants and animals in the Hudson Valley and the Hudson River itself, and then developed the artwork….” 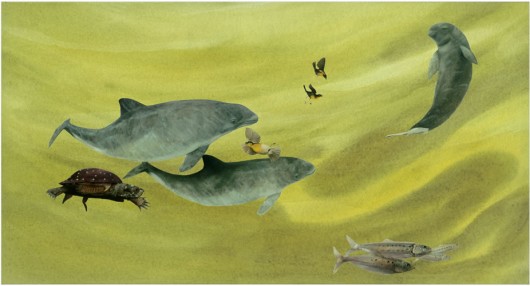 For the current exhibit, the gallery presents 12 original oil paintings and a limited edition suite of giclee prints created from the paintings. In the prints, the final image is comprised of multiple layers, creating a gestalt image. View the prints here.

“Many approaches to creating imagery are available when working with laminated glass,” explains Sears,  “but I was particularly attracted to the possibilities that could arise from the layering of grounds and imagery within the laminate structure. This inspired me to create the images I used to make the glass as multiple paintings….oil on primed paper with the creatures floating on stark white backgrounds…”

Some of the creatures seem surreal at first, yet they are derived from nature and detailed scientific observations. The effect is at once stunning and welcoming. The artist notes: “The flora and fauna described in my paintings create a liaison between our natural world and our human world and imply a kinship to the human experience.”

For a slideshow of the laminated art glass panels at the Tarrytown train station,  click here.

Photos courtesy of artist at HollySears.com