Update: After the Deluge. Mamaroneck, Larchmont Reel from Record Flood 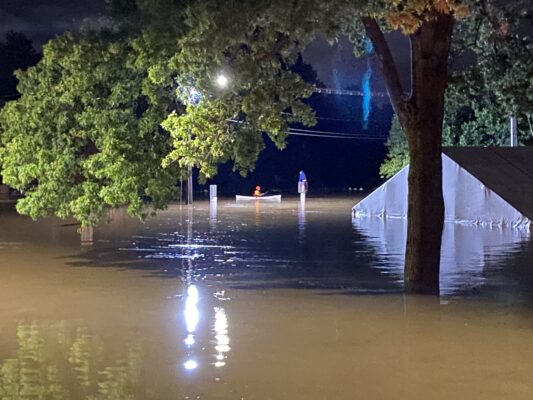 Donations: The Coalition for Community – a group of local nonprofits – is calling for immediate donations of used clothing, gift cards, school supplies and more, as well as direct financial support for victims via the Community Resource Center’s Flood Emergency Fund. Volunteers also are in high need for today and tomorrow. READ ALL DONATIONS NEEDS & SIGN UP LINKS HERE.

Garbage pick-up: Special garbage/rubbish collection on Saturday, September 4, 2021 for residents of the unincorporated Town of Mamaroneck and Village of Larchmont. The collection will begin at 8:00am

The skies opened up and the rivers rose with jaw-dropping suddenness.  Even residents of the traditionally flood-prone areas of Washingtonville, and The Flats in the Village of Mamaroneck had never seen or even heard of anything quite like it.  As the remnants of Tropical Storm Ida dumped inches of rain per hour Wednesday evening, the Mamaroneck and Sheldrake Rivers, already swollen from an historically wet August, merged into a devastating flood that trapped vehicles and even destroyed cars moved to what old hands believed was high ground.

Larchmont and all the Sound Shore communities share the devastation.

Rescue crews scrambled to pluck trapped homeowners from their front porches, and stunned motorists from suddenly submerged vehicles.  In seemingly every direction you could make out the glow of headlights shining up through silty river water until finally going dark beneath the rising flood.  At one point a stranded pedestrian perched atop a street sign on Jefferson Avenue pleaded for help until a rescuer arrived by canoe to offer comfort and a ride to safety.

Buildings went dark as electric power failed. Where the lights stayed on, strobing alarm beacons and harsh alarm tones pulsed in the night.  Even the rescuers were victimized as flood water pushed in the door of a Village Fire station on Mamaroneck Avenue.

The waters receded by mid morning and under incongruously clear sunny skies the full scope of the damage began to become apparent.  At its height, the floodwater nearly reached the elevated Metro North tracks.  For several blocks virtually every business north of the train viaduct along Mamaroneck Avenue has been wrecked.  Area residents who thought the elevated parking lot at the old train station was high enough were rudely disappointed to find the vehicles soaked and ruined avoid a rubble strewn lot.  The waters even invaded the restaurant, Modern-on-the-Rails, that’s now housed there.

This is the second round of flooding a week, and the worst anyone can recall.  Village of Mamaroneck Mayor Tom Murphy, who has been pleading with the federal government and the Army Corps of Engineers to fast track the already approved Flood Mitigation Project for the area, tells us “it’s safe to say,” this is an historic record event.  Mamaroneck Town Supervisor Nancy Seligson reports we received an astound 8-and-a-half inches rain overnight.

Lou Young
Lou Young is a veteran journalist who has been honored with multiple awards including 10 Emmys. He retired in 2017 after 43 years in TV News and was recently appointed a Trustee in the Village of Mamaroneck, and has suspended reporting duties.
Facebook
Twitter
Linkedin
Email
Print
Subscribe
Login