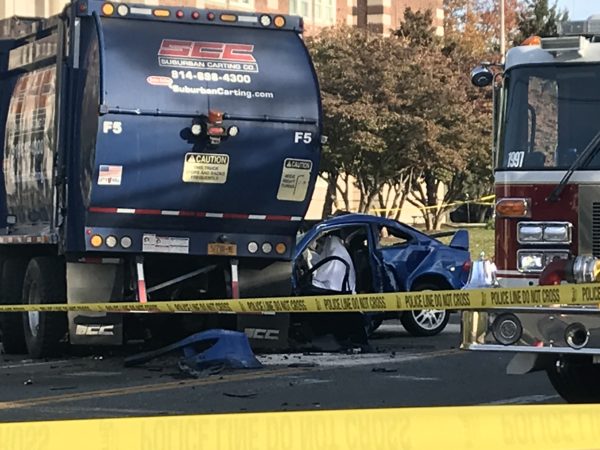 Update: The identities of the victims in the fatal crash have been released. Pronounced dead by a village Emergency Management Services medic at the scene of the 7:18 a.m. crash were Rolando Oliveros, 20, and his passenger, Omar Ayala, 17, both of New Rochelle. The driver of the truck was taken to Sound Shore Medical Center for evaluation.

Two people were killed at 7:18 am Saturday morning when their car collided with a private sanitation truck in front of Mamaroneck High School, say police.

Witnesses say a blue 2005 Acura sedan was traveling at a high speed southbound on the W. Boston Post Road when a Suburban Carting Co. truck exited the parking lot near Starbucks, and made a left hand turn onto the Post Road, and then, say witnesses, began to turn left into the side entrance of the High School.

The Post Road was closed to traffic for several hours from Richbell Road north to Orienta. Inside the vehicle, one could see airbags deployed, and what appeared to be a body covered in a white sheet behind the wheel in the driver’s seat.

“I was here when it happened, I just heard a very loud noise,” said Candy Franco, who works behind the entrance desk at Equinox,  across the street from the scene of the accident. 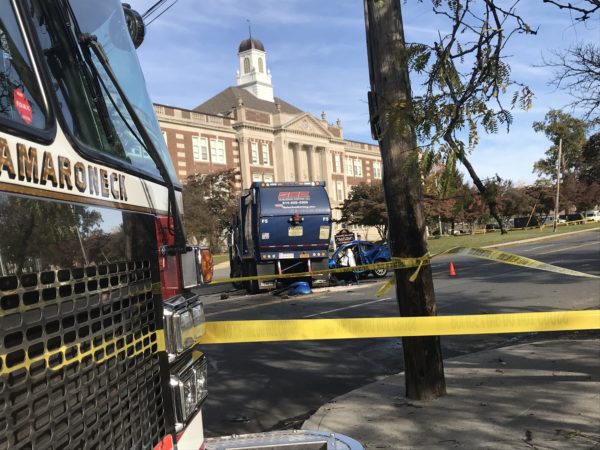 “A member (of the gym) walked in and she was  really shaking, and said that the car was underneath the truck.”

Staff at Equinox say several of them called 911.

“It was really awful to see,” said an instructor at the fitness center, who asked not to be identified. “You knew right away no one could survive that.”

Identities of the victims have not been released and police say the accident remains an active investigation.

Garbage truck was at fault. He was across the street picking up garbage and drove across Boston post rd over the double yellow lines and in front of the car. Stop using the kids as speed as a factor for the accident. Take responsibility. Driver should ticketed for breaking the law. Suburban Carting should be ashamed of themselves. They already have a bad reputation.

Police reported that speed was a factor.