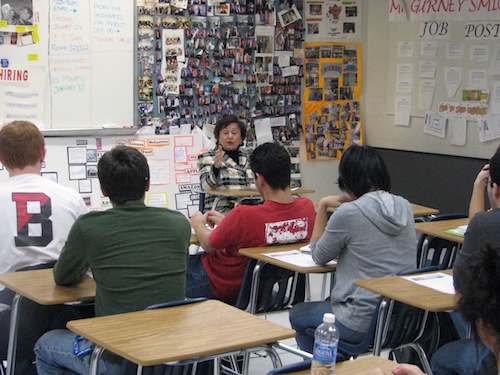 U.S. Rep. Nita Lowey, who represents most of Westchester and parts of Rockland Counties in Congress, made fast friends with a group of New Rochelle High School seniors during a classroom visit Monday, inviting them to meet again online Tuesday night during President Obama’s State of the Union address.

“I don’t want to talk at you,” Congresswoman Lowey, a Democrat who represents New York’s 18th District, said.  “I want to have a conversation.”

Lowey’s visit to teacher Darren Gurney’s AP macroeconomics class was a precursor to the virtual Facebook and Twitter chat with students she has planned for before and after the President’s speech. Students can participate by going to Lowey’s Facebook page  or using the hashtag #LoweyChat on Twitter.

She also will meet with New Rochelle High AP government students in Washington later this week.

Lowey reiterated several times her commitment to staying non-partisan during the classroom discussion, which touched on her priorities: creating jobs, investing in education and tax relief.

She did, however, come right out and say how important she thinks it is for young people to get involved in their government as soon as they are old enough.

“It’s sad to me that in this great country of ours such a small percentage of people vote,” she said.

“Whatever you do with your life, I hope you will take some time for public service because it is very rewarding.”