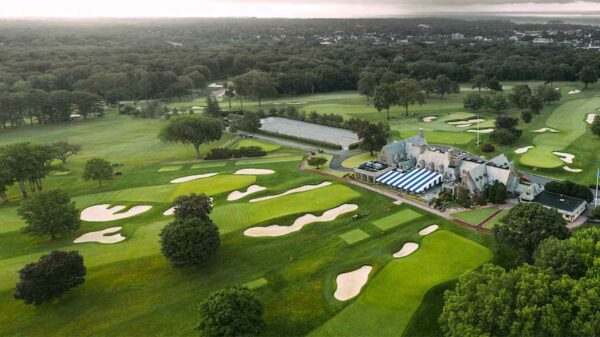 Former President Donald Trump’s planned visit and fundraiser at the Winged Foot Country Club in Mamaroneck appears to be moving forward on August 4, despite community opposition.

A recent story on NBC News reported that “quiet plans” were being made for a Trump tribute banquet at the prestigious club and golf course. In the article, Winged Foot members who strongly resented the event anonymously voiced their opposition. Trump is said to have been a member for 50-plus years.

But plans are also being made for a local protest, according to Shannon Powell, co-founder of Indivisible Westchester and a resident of Larchmont. “Donald Trump instigated a violent attack on our Capitol and continues to perpetuate lies about the outcome of the 2020 election,” Powell said in a statement.

“Authoritarianism, corruption, and hatred should not be celebrated. We stand with club members who are outraged by plans to hold such an event,” she says.

Reporters that reached out to club member Ted Virtue, who is hosting the gala say he declined to comment. Virtue is a former Deutche Bank executive.

On August 5,  Trump is headlining a fundraiser for the NY GOP at his golf course in Briarcliff. Indivisible Westchester has organized a protest beginning at 7 pm. 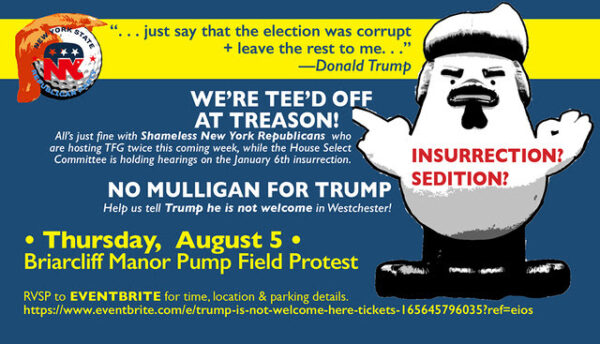 According to the Mamaroneck Historical Society, Donald Trump received 31 percent of the vote in Westchester and 17 percent in Mamaroneck in 2020, one of the lowest Republican percentages ever recorded in the town.

What exactly are you protesting? It’s a private club, he has been a member forever. This is the club’s call

He can visit the club anytime he wants to, and we, as a community, can let him know that he is a fascist who is unwelcome here.

Please show up tomorrow Allen, and let him know what you think of him. I doubt he sleeps at night wondering.

You clearly do not understand Donald Trump at all, because he cares VERY deeply what people like Allen think. That is ALL he cares about, not America, not the constitution, not our history or institutions, and certainly not about the well-being of a little person like you Mike.

That’s it, that’s all it’s ever been for Drumpf! The fact that you can’t see this so clearly as others have for decades in the NY real estate world is pathetic.

For Pete’s sake let it go. Find a new villain, he’s finished. It’s a private club. Would you rather we shred The Constitution? It is still a free country, isn’t it?

You’re free to protest & those hosting &/or attending the event are free to do so.

Agreed. Private Club. Nothing about Obama’s Bday party on this site.

Obama was not impeached twice, nor did he incite violence that led to death and injury.

Gotta go with it

Dues paying member in good standing. Free country.
They should edit their bylaws then.