Trump Supporters Cause Disruptions on Cuomo Bridge, Rally and Caravan in Mamaroneck

Update: Town of Mamaroneck officials say that on Sunday at approximately 1:00 pm, a caravan of Trump supporters in about 100 vehicles was seen driving in the Town of Mamaroneck on the Boston Post Road with drivers and passengers honking horns and waving flags.

A caller reported to Town Police that the caravan was traveling east in the area of Boston Post Road and Weaver Street when she saw what appeared to be a gun pointed out of the window of a black pickup truck.

“It was clear they were here to intimidate and harass. It was overwhelming to witness,” says one local resident.

Based upon the lack of detailed information, the decision was made to monitor the caravan until it left the Town of Mamaroneck.  No other issues were reported. Read more 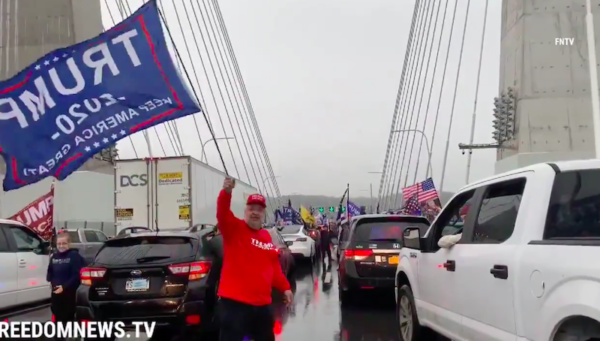 Other rallies of Trump supporters, such as those below, have been quite visible over the last few weeks on the Boston Post Road in Mamaroneck, near a gathering spot in Harbor Island Park, among other locations.

But nothing compares to what happened on the Mario Cuomo (aka Tappan Zee) Bridge Sunday. 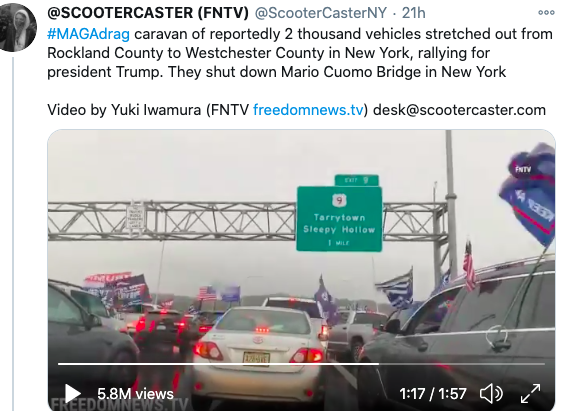 “What was seen in New York was aggressive, dangerous, and reckless behavior by some Trump supporters. Trump supporters are seen on social media, exiting their cars on the Gov. Mario M. Cuomo Bridge and causing danger to themselves and others in inclement weather and backing up Hudson Valley traffic,” says State Sen. David Carlucci in a statement.

“The New York State Police should be working to identify these individuals and charging them. We all have the right to show support for a presidential candidate, but we do not have the right to endanger others and break the law.”

this is the most limo-lib coastal elite news article ive ever seen…. jesus christ get a grip people

But anti Trump Antifa punks blocking traffic all over NYC and clashing with the NYPD is perfectly ok.

Isnt it all free speech??