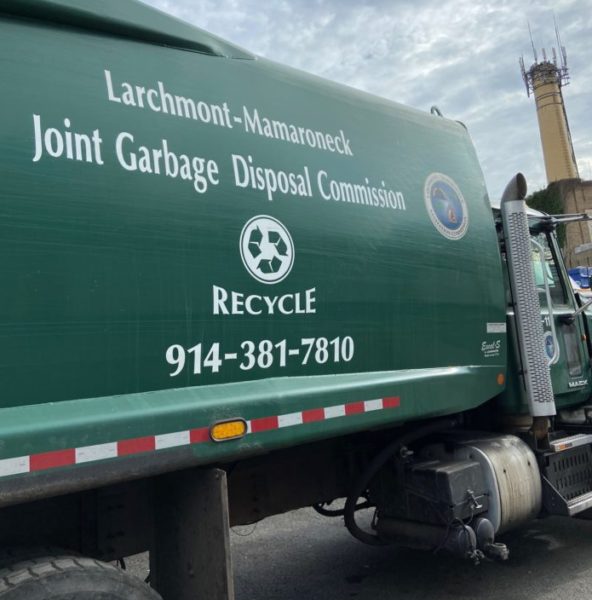 Residents in both Larchmont and the Town of Mamaroneck have until Friday, October 30 to submit their opinions to Town Government on the take-out-your-own-trash issue.

Some Larchmont and Town of Mamaroneck residents are fighting to uphold a decades-old luxury perk, suspended during Covid, to have someone else take their garbage cans to the curb.

In Larchmont and the unincorporated sections of the Town of Mamaroneck, homeowners have enjoyed not having to cart their dirty trash cans, and instead have relied on sanitation workers to retrieve the bins from either the back or side of their homes on pickup day, a relatively rare and enviable service.

But then came Covid-19. At the start of the pandemic shutdown the local sanitation commission cut back on the “side & back door service” to which it’s referred, and instituted curbside pickup. The move was taken as a health precaution to minimize the number of workers per truck.  Now the Larchmont/Mamaroneck Joint Garbage Disposal Commission is considering sticking with curbside only service to operate more efficiently, protect sanitation workers, and save money.

In an unusual joint meeting of the Village of Larchmont Board of Trustees and Trustees of the Town of Mamaroneck, some homeowners insisted that the high cost of local taxes entitles them to the the perk.

David Feldman of Larchmont said “The reality is we pay a tremendous amount in taxes and people expect top flight services…that enriches the lives of the people in our community.”

Garbage services costs for an average assessed $1,257,000 area home is $657 per year according to town officials.

Steve Altieri, Town of Mamaroneck Administrator, noted that sticking to curbside-only service will provide a safer work environment for crews often forced to carry 100-200 pounds of bags from backyards, “steep driveways, through snow, stairwells…” Altieri estimates that eliminating the perk would save at least $240,000 in a $3 million dollar budget. He explained that with curbside-only service they can consider additional recycling programs such as offering a weekly food waste pickup.

Up until late March, side and backyard service was offered for the two weekly regular garbage days. Rather than hauling the hefty cans, crews would routinely carry the filled trash bags from side and backyards. As it turns out, many residents are still unaware the service option ever existed. Others simply chose to take their own rubbish cans to the curb.

Many who use it though, seem extremely attached to the idea of not taking out their trash; According to some who spoke, having garbage cans on the curb would be unsightly. One resident complained, “It’s a shame to have bins often overturned, often blowing around often with pieces of escaped trash blowing around,” as has allegedly been the case since the pandemic suspension of on-property collection.

Many residents say they cannot get back from work in time to pick up their bins.  “They are left out all day,” said Wendy Weinstein, a Larchmont resident.

Another homeowner quoted a social media comment about the issue: “It’s an eyesore to have everyone’s garbage on the curbs all day. I really enjoyed the convenience of having the trash picked up from the shed.”

Town of Mamaroneck Supervisor Nancy Seligson says it’s time for the concierge-type trash option to go away. “By bringing waste to the curb it gives us the opportunity to explore more ways of becoming more sustainable in reducing the amount of waste we produce and the way we collect it. It would give us the opportunity of exploring food waste pickup. Right now people have to bring it over to Maxwell Ave (collection facility) and we believe that if it was picked up (curbside) there would be a very large increase in the program…This is an advancement for the community to move forward and improve that service,” she says.

If the measure is approved residents age 70 and older can apply for exemption and continue to have “side & back door service.”

Some residents who participated in the online public hearing pointed out that neighboring affluent Village of Scarsdale still offers the deluxe service.

Residents in both Larchmont and Town of Mamaroneck have until Friday, October 30, to submit their opinions to Trustees on the take-out-your-own-trash issue. The date for a final decision has not yet been determined.

The Village of Mamaroneck is served by its own trash collection operation, under the village Department of Public Works, and has a similar backyard pickup program, which is also suspended because of the pandemic. So far, no indication has been given if that perk, too, may fall as a victim of Covid 19.

Thank you Debra for amplifying the discussion. Hundreds of neighbors have signed a petition which outlines both sides of the issue, environmental and service – you only discussed the service side. We hope to keep side/back trash collection, reduce trash overall, implement composting pickup, and make our community more beautiful and trash free – and provide service and safety for residents. Those are the goals which are not mutually exclusive; it is not just maintaining services. After all, it would be cheapest for the community to eliminate ALL trash pickup and we could all go to the dump as they do elsewhere. But, I don’t think we want that and we do pay for more. Every resident has always had the option of curbside pickup or side/back, which also increases property values for many reasons.
– 14+ of our neighboring communities offer side/back trash collection.
– The $ savings is fluid – we were told $200,000 or $10 per resident
– Sanitation workers work partial days for full pay and benefits. We can rework the allocation of that resource to achieve all our goals – as stated above.

When Scarsdale redid their trash collection recently their study was 37 pages long filled with data. We should do the same, analyze the data, and it should be made public as they did. The power point presented at the joint meeting was well intentioned but extremely basic and top line. We need a deeper dive. Best to all and thank you.

First, I didn’t even know about this perk and second, I have no desire to fund it. I think the savings, as you report above, are quite significant. Personally, I think they could probably save money by reducing to a once-a-week garbage pick up – or if they do 2 pick ups then one of them could pick up food waste/compost. Make it more convenient and more people will do it (and this could be brought to the curb too!).

I would much rather have weekly pick up of food waste. It is not so taxing to bring one’s trash to the curb. We do it three times per week.

Who Knew, I’ve been taking mine out to the curb for 20 years! What’s next, banning leaf blowers?

Admittedly, this is not the most pressing issue in the world, but that doesn’t mean it the thoughts and opinions of the community should not be expressed. I, for one, oppose this reduction in services. If we want to have food waste pick-up, tell us what that would cost and we can decide if we want to pay more to have both, or have one or the other. The savings for eliminating this service is $10 per household, which doesn’t seem very meaningful to me.

I too oppose a reduction in services. Twice weekly side/back of the house pickup of trash is greatly appreciated by many residents, especially now, while people are spending much more time living, working, and going to school at home. $10 per household is well worth it. I agree that if we want to have food waste pickup additionally, the cost should be made public, and people can decide then. I hope the temporary suspension of twice per week side/back pickup ends very soon

Seriously? With all that’s going on in the world THIS is what our entitled, apparently tone-deaf neighbors choose to focus on? Having to put out their garbage? I’m sure those battling covid or joblessness will understand

How do you give your opinions to the town before October 30th?

If you live in the Town of Mamaroneck you should email the supervisor or council members. Their emails can be found on the town website. Here is the link: https://www.townofmamaroneckny.org/310/Town-Board Larchmont residents should email the Mayor and Board of Trustees Here is the link: https://villageoflarchmont.org/officials/?doing_wp_cron=1603892539.0822989940643310546875

to think that people are worried that empty trash cans blowing in the wind could cause their neighborhood to look ‘unsightly’ says it all.

Trust me, if you’ve ever had to haul your trash out to the curb each and every week especially in the summer months, it sure does stink! The other thing is it attracts wildlife such as raccoons and smelly skunks! It’s pretty gross actually and this is why people have always protected their garbage in enclosed coverage areas like sheds. It makes a big difference! One thought came to mind: what does the Westchester sanitation department have to say about this? Are they concerned with eliminating jobs should this new system go into effect? Some of these guys have been dedicated loyal employees for years; we need to find out how will this impact their livelihoods. And yes, these are real world problems not frivolous suburban elite issues. It’s about being an active part of the community. Garbage effects widespread pandemics too!