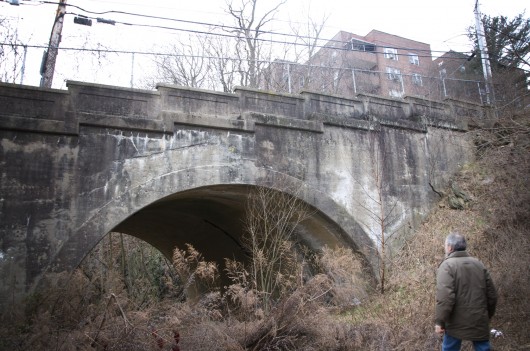 It’s not hard to find people around here that are fascinated with trains.  Two of our favorite blogs, Trainjotting and IRidetheHarlemLine,  write in the realm of Metro North.

But there is also much deep fascination with a local railroad that has ceased to exist, the New York, Westchester and Boston, or NYW&B.

“Scattered about Westchester and the Bronx are original, authentic pieces of a once glamorous and noteworthy railroad,” says New Rochelle’s Eliot Goldfinger. 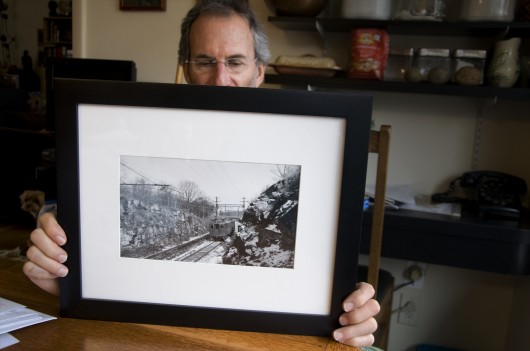 We have covered both efforts to reclaim a NY,W&B railroad bridge as green space in Pelham and the re-use of lovely old stations in New Rochelle.

But no one knows this old railroad like  Goldfinger, who practices what he calls “suburban archeology,” discovering old artifacts still standing, whether deep in the woods behind his home in New Rochelle, or behind a wall in White Plains, or hiding in plain sight, such as the Girl Scout House in Larchmont.

Eliot, who took us on a tour of old artifacts around Southern Westchester, as you can see in the photos, writes:

The NYW&B was born in 1912 and, only twenty five years later, died at the very end of 1937. It ran northward from the area of the Willis Avenue Bridge in the Bronx, split at Mt. Vernon, and terminated either in White Plains ((at the Westchester Mall) or in Port Chester.

Scattered about Westchester and the Bronx are original, authentic pieces of a once glamorous and noteworthy railroad. The NYW&B didn’t last long enough to be updated, improved, and modernized, so every lone fence post, concrete foundation for the overhead wire structure, concrete abutment, or extant station house, is original. Finding, studying and appreciating these artifacts are true exercises in suburban archaeology.

I was first introduced to this railway in 1959 when my family moved from Mt. Vernon to New Rochelle. The rear edge of our back yard abutted a city-owned deep rock cut that was the right-of-way of the NYW&B. Some years later, the railroad properties behind our street were divided up and auctioned by the City of New Rochelle, and my parents bought our lot. I have since moved back here with my family, and in landscaping my yard and the railroad ravine, have discovered two concrete foundations for the overhead wire structure, a concrete manhole and ceramic conduit for the underground telephone wires, many steel spikes of two different sizes, several heavy duty nuts and bolts to bolt the rails together and the connecting plates that go with them, broken signal glass and the light bulb (unbroken!) that went behind the glass.

There are currently four books devoted solely to the NYW&B, a website, many fanatical fans, and NYW&B memorabilia that produce record-breaking eBay sales. (A postcard of any other railway typically sells for $2 at train shows. A NYW&B postcard recently sold for over $500 on ebay).

This May 29th was the 100th anniversary of the opening of the New York, Westchester & Boston Railway. Happy Anniversary!

There was a footbridge over the tracks between Lincoln Avenue and Chester Heights stations. I have a photo of my mother sitting on the steps leading up to the bridge, taken in the early 1930s when she was dating my father. In the background you can see a few houses on Hutchinson Boulevard. I lived about a ten-minute walk from this bridge, near the old Lincoln Avenue station, 1944 to 1958. The station was demolished in 1950, as I recall, to make room for an apartment complex. I also have a photo of a NYW&B train passing by Wilson Pool, c. 1932., taken by my grandfather, Walter A. Miles, who was Mount Vernon City Historian at the time.

I have been living in Yonkers and new Rochelle for the past 25 years and for all that time I am fascinated by the westchester Boston because of the way it was built with massive concrete structures and abutments and no at grade crossings . I mean I read about it over and over and never get sick of something I even read before . It’s incredible to me and disgraceful it was destroyed

This is an amazing find. This spot was known to the local White Plain kids as “the old railroad”– a forbidden place to go but we went anyway and had fun exploring there. I lived on Overlook Road and Bryant Avenue during the late 60s-early 70s and attended Mamaroneck Avenue Elementary School.

Though I no longer live in NY, I grew up about 150 feet north of the former Ridgeway station and our house backed up to the right-of-way. As a kid (in the ’60s), I explored the area many times and even once found a trail spike. My father, Bob Roston, was one of the people who made the Greenway a reality.

When I was aboy in the ’30’s I lived at 62 Pleasant Ave White Plains which backed up to the NYW&B RR just above the Bolton Ave overpass and below the Gedney Way Station I played on the RR property I was also present when Johnny Bogart of Gedney Terr used a wire from the Bolton Ave Bridge to contact the RR catenary and severely burned himself. I am a model RR’er and have built a condensed NYW&B in N scale in my basement here in Woodstock, GA

Very nice photos. I have seen that old bridge a few times.

Join us in New Rochelle on July 14 at the New Rochelle Public Library for a Centennial Celebration of the New York, Westchester & Boston Railway! From 10:00 a.m. to 2:00 p.m., enjoy interesting exhibits and slide shows that will explore the mystery and intrigue surrounding the construction, operation, and eventual decline of this state-of-the-art rapid transit railway. A number of historical organizations and vendors will also be on-hand with displays and railroad-related items for sale. Get into the spirit of the event and travel by train! New Rochelle is served by frequent Amtrak and Metro-North trains. The New Rochelle Public Library is a short six-minute walk from the train station. Contact me for more information or visit http://www.nywbry.com!

This is so interesting! I live in the San Francisco area, but I grew up in Rye. It’s fascinating to know this was in my backyard (or near it) all that time. I’m interested in this kind of local history, anywhere. And – I think this must be the Eliot Goldfinger who I went to elementary school (WDS) with. Am I right? I would love to see these places. I’ll be in NY next month (although probably not on July 14, unfortunately). Please feel free to pass on my email address to Eliot. Thanks!

One other comment. If you want a slightly freaky experience tracing the NYW&B RR, check out Wykagyl Station on North Ave at Quaker Ridge. Go around back into the Quaker Ridge parking area and approach the Wykagyl Station Post Office (I love that the P.O. still retains the old name 75 years later). Off to the right you can see the remains of the old station above where the tracks used to be. Go into the area in back of and under the station, and if you get in close enough you can still see the platforms and access stairs. Just beware of the crows and pigeons, which live there in huge numbers and which don’t take kindly to being disturbed!

wow.
pls keep us apprised of all Centennial happenings!

I recently contacted Simon Properties, the operators of the Westchester Mall, which was famously built on the NYWB RR White Plains terminal site, to ask if they planned to commemorate today – May 29, 2012 – as the railroad’s centennial. I was figuring maybe a large pink bow attached to the display in the mall’s Food Court! They were very nice but said No they weren’t, but New Rochelle was planning a tribute on July 14th.