Some homeowners in the Town of Mamaroneck are now receiving a mailed letter of explanation for the unannounced increase in taxes affecting 740 parcels on the western edge of the Town.

Many residents just saw their annual tax bills, delivered this month, rise anywhere from hundreds to many thousands of dollars with no warning.

Town Administrator Steve Altieri, explaining the lack of any announcement writes, “In retrospect we could have just advised people of the reclassification but I am not sure that the taxpayers would have understood the meaning of that change.”

As we reported earlier this week, the 740 parcels within the yellow lines (see map, below) have been reassigned to the New Rochelle Sewer District, which is what caused significant tax increases for those homeowners. This, says the Town, is the result of a long-time error, during which time the properties were mistakenly classified in the Mamaroneck Valley Sewer Districts. (In many cases the County sewer districts transcend local municipal boundaries;  such is the case in the Town of Mamaroneck. ) 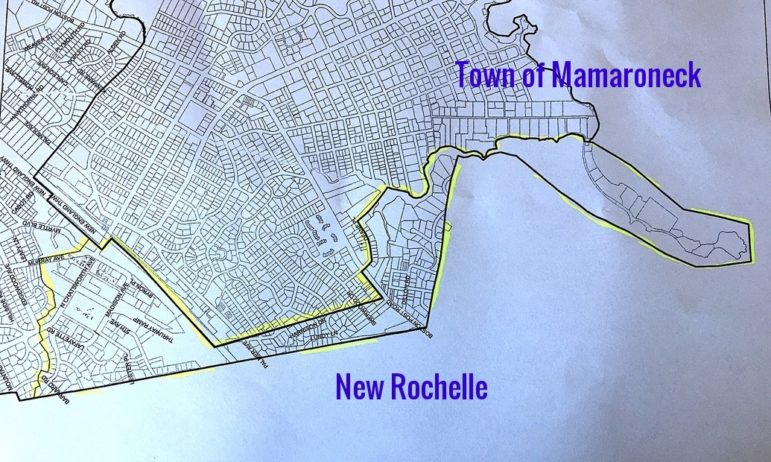 Residents have expressed anger that these tax hikes were not announced.

“When I called the Town office to ask why there had been no notice, they tried to spin it that we have been receiving a benefit for all the years that we have been improperly classified,” said a resident on Lafayette Road, whose own annual tax bill increased by over $1000.  “I disagree.”

In response to our inquiry, Mr. Altieri wrote,

” The property tax warrants from Westchester County come to the Town in February, the Town must then due the necessary conversions to establish tax rates and begin the process of preparing the actual tax bills.  At the point we receive the warrant it was not possible to determine what the impact upon each individual taxpayer effected by the re-classification would be.  However having said that, in retrospect we could have just advised people of the reclassification but I am not sure that the taxpayers would have understood the meaning of that change.  The Town Supervisor and I have prepared a letter which is being mailed to the 740 properties (this week.)”

My house is not in the affected area, but the corruption within the Town of Mamaroneck appraisal and tax administration system is glaring. I WISH I could sell my house at what they have it appraised for. It is for sale now and bids are coming in at 20% less than their “market value”. So after being overtaxed for several years, who gets to keep that money? Surprise … they do! BTW, grieving the appraisal was useless. They suggested I go to Small Claims Court, as if I had that sort of time.