To the Editor: Westchester Democrats Should Vote Tuesday 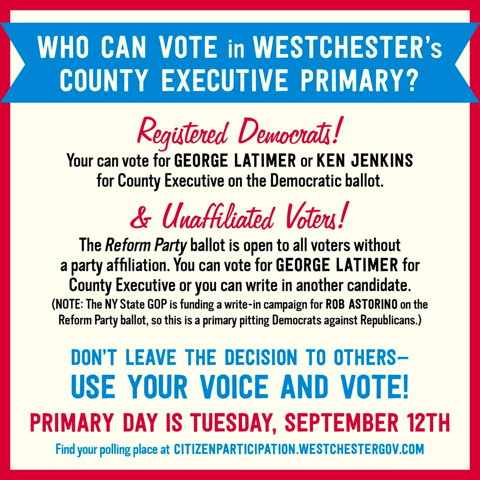 Update:
Democrat George Latimer won the Democratic party’s primary with 63 percent of the vote on Tuesday.
To the Editor:
Tuesday September 12, is primary day.  Today the Democrats will choose which of two candidates will run against current County Executive, Rob Astorino  (or Disatorino, as I like to call him).
Both Democratic candidates are very good and you can go to their websites (links below) to learn more about them.  I plan to vote for George Latimer, as I think he not only would be the better County Executive, but as he currently represents 1/3 of the County as NY State Senator he is better known and thus more electable.   That said, Ken Jenkins is also great.
Our current County Executive, Rob Astorino, is horrible on every issue: guns, managing the budget, healthcare, immigration, environment, affordable housing, women’s rights, parks, police (yes, it’s like pulling teeth to get the county to fully staff the county police force), domestic abuse, and county bus service to name a few.   He is closely aligned with Donald Trump, and was on his list for the Secretary of Housing and Urban Development.  He also has a ton of money behind him.
If there’s a large turnout, it would signal a strong interest in the race and would encourage people to open their wallets giving the winner of the primary a shot at winning the County Executive seat.
We should be able to win this seat.  Democrats outnumber Republicans 2 to 1 in Westchester County—but unlike the Republicans, Democrats typically don’t vote in local elections and don’t contribute money to local candidates.   Let’s change that!
Please vote.  The polls are open from 6AM-9PM
Latimer for Westchester
Jenkins for Westchester
Signed,
Member, Indivisible Westchester
First time here? Please... subscribe to our newsletter!
Welcome back! Please subscribe to our newsletter!   Just click here.

Both Jenkins and Latimer will raise taxes so they can pay for all of their spending plans, not to mention that both would’ve rolled over and let the Feds take over our zoning laws. There’s a reason Andy Spano got kicked out as County Executive and we all know it was because of his tax and spend ways. So far neither Jenkins nor Latimer seem to be any different from Andy Spano so why even entertain the thought? Much like Noam Bramson, Jenkins and Latimer seem to forget our issues are local and not national.

When you do go out and vote, think twice and then write in Rob Astorino for the Reform Party.