To the Editor: Boo Humbug. I don’t like Halloween 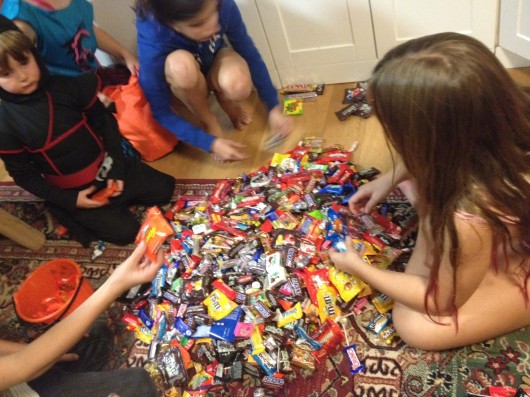 You can hear Pam Landry weekends on The Peak, 107.1 FM

There.  I said it.  Not a popular opinion, I know.

But does it make me a bad American

This is not to say I’ve always disliked Halloween.   When I was a kid growing up in Westchester, I thought Halloween was fun.  Dressing up, knocking on doors, coming home with a sack full of candy.  Not a bad way to spend an Autumn evening when you’re a kid.

I grew up in a middle-class Westchester family; we lived in apartments in New Rochelle and Mamaroneck until my parents bought their first – and only – house sometime in the late 60’s.  That’s when I discovered that apartment trick or treating was far less exciting than begging house to house: walking down the street in the dark with scads of other kids was much more adventurous than knocking on a series of doors, one next to the other, down a single hallway.   My house neighborhood in Mamaroneck had so many kids in it that we’d have to wait in line to get to the front door of the next house.  As for my favorite Halloween costume, it was a white sheet with eyeholes cut out of it and a big sign that read “BOO” which I carried tacked to a stick and which my big sister made for me.  I liked this get-up so much that I wore it a couple of years in a row, even though holding the sign presented a bit of a problem as I had my pillow case for candy AND my little orange Unicef box to juggle as well.  But I managed.

Now I have my own house in a middle-class shoreline neighborhood and the kids who come knocking on Halloween are few and far between.  Part of our drought of trick or treaters I attribute to the steep hills around my house…keeps the lazy kids away.  Thinning of the herd.  And part of it I attribute to Halloween parties being more common now, where kids are in a more contained, “safer” environment and what a shame that is.  Takes all the fun out of trick or treating.  But such is the state of things today.

I haven’t been a kid for a long time (well at least physically) and I haven’t liked Halloween for years.  The last time I actually “dressed up” for a Halloween party was when I was in college and then it was due purely to peer pressure, not because I actually wanted to.   Wearing a mask just made it harder to drink beer as far as I was concerned.   Seeing other adults in costume is mildly amusing but really, in my world, just kids and animals should wear Halloween costumes.  I just don’t get the whole adult dress-up thing.

And exactly when did Halloween become a HOLIDAY???  Halloween is NOT a holiday; banks and the post office aren’t closed so you know it’s not a holiday.  Ah, but for retail it is a holiday…a big one…and retail has convinced the general population (because we do love our holidays) that damn it, Halloween is a holiday and there is a lot of stuff to be bought.  For starters the candy displays are up in August.   Yummy!  But then, there are so many preservatives in the stuff that it probably has a half-life of 50 years.   Then come the decorations…the pumpkins and the ghosts and the skeletons and the one thing that I actually like about Halloween: the black cat “stuff”.  I am a black cat freak so I will go to stores just to seek out cool black cat items.  Unfortunately, Halloween is a very bad time for black cats (which is another reason why I don’t like Halloween).  Bad, twisted people have been known to do bad, twisted things to black cats on Halloween so most animal shelters (and hopefully pet stores) won’t adopt out/sell black cats for a couple of weeks around October 31.  Nice, huh?

But back to why Halloween has become a “holiday”: retail.  There is candy to buy; decorations, cards, make-up, costumes, pumpkins, wigs.  Drive up and down Route 1 and count the Halloween stores that crop up about a month before Halloween.  If there is a vacant storefront (and heaven knows there are a LOT of them right now) it is now a Halloween store.   They reproduce like rabbits.  I did a little research on the internet and depending on the “source” keep coming up with a Halloween sales figure for 2009 of between five and six BILLION dollars.  Yup: BILLION.  Now THAT’S scary.

Finally, it’s the whole death theme that I find to be a turnoff.  I am not fond of monsters or ghouls and I don’t like being scared; it doesn’t make me feel good, it makes me feel bad.  Graveyards are not my thing and I don’t find headless, bloody creatures enjoyable.

If you are an active Halloween supporter, have fun and be safe.  I’ll be home thinking happy thoughts…..