To the Editor: Advice on Hydrofracking from Geo Latimer 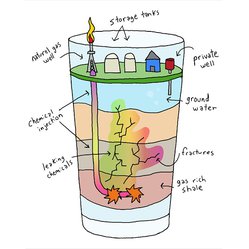 Measure Twice, Cut Once: Advice from My Father on Hydrofracking

Just a few weeks ago, I reached a milestone date: 20 years since my father, Stan, passed away. My father was a practical man, with blue collar skills as a director of maintenance for a prominent beach club along the Sound Shore; a grade school drop-out but a man with a shrewd understanding of people and of life, gained the hard way. I am still learning from his example these many years later.

Of the many things he taught me, one of them related to woodworking, which he was expert at, and I was and still am incompetent at. Stan told me: “Son, always measure twice and cut once”. Failure to do so meant wasting a piece of wood, and all the problems that then result in trying to complete a project.

His advice, sound as it was, rings in my ears years later, as I consider the matter of “Hydrofracking” – the capturing of natural gas embedded in shale rock below the surface of the land in the Southern Tier of Upstate New York.

The extraction of such gas has become a political litmus test between those who wildly favor the process, and those who deeply oppose it. On one side, there are economic interests, short- and long-term, in relatively impoverished sections of rural New York who support it; on the other side, committed environmentalists who see the damage to water, land and air as a real danger, and a preventable danger, and thus, oppose it.

I am supporting legislation which will establish a moratorium of issuance of any drilling permits by the State Department of Environmental Conservation until a full and independent health study has been completed, released, and publicly debated, on the health impacts of hydrofracking.

Why delay the drilling if badly-needed economic prosperity follows?

It goes back to Stan’s advice. If we advance this process in New York State, no matter how many wells are drilled in wide-open spaces in North Dakota, Oklahoma,  Texas or even Pennsylvania, without fully and carefully assessing the long- as well as short-term impacts to our people, we may very well ruin much more than a piece of wood. We may destroy public drinking watersheds, pollute land with hazardous wastewater, and impact air quality, along with other results, that can offset more than the temporary increase in business activity generated by out-of-town drillers and oil riggers doing their work upstate.

The gas has been there for thousands of years. It isn’t going away anytime soon. We ought not be in a rush to use it since we aren’t going to lose it.

Prudence may seem like weakness to the “drill, baby, drill” crowd, but people didn’t come tougher than Stan. He knew that recklessness was not strength. It takes a strong person to resist the urgency of money to be made today, to make sure we cut the wood right for tomorrow.

Another story about Stan, and this time, I’ll include my Mom, Loretta, gone now over 15 years.  Among other things, they were both smokers. When the 1964 U.S. Surgeon General’s report about smoking came out, stating that smoking could be hazardous to your health – nothing quite so definite as what we now know – Stan quit right then and there. On the spot. Never smoked again. Loretta, a wonderful woman, could not. She continued on another 25 years, until her age and health mandated her to cease. Stan lived to 82, Loretta died at age 74. They both got the same warning at the same time; he treated it with utmost seriousness, and my sister and I enjoyed seeing him live into his 80s, and sadly saw our mother pass away at a younger age.

a fly on the wall

But why should we continue to support the middle eastern dictators when we have a plentiful supply of natural gas right here in our own backyard? We’ll burn PA gas but not our own? What a crock.
Why not enrich upstate landowners?
And fracking’s already safely done in over 30 states, why not in NY? Why is only NY missing out on the energy revolution?
Doesn’t NY need to jobs and the tax revenue?
What a pathetic position.

Oh my God…. It has been over five years….