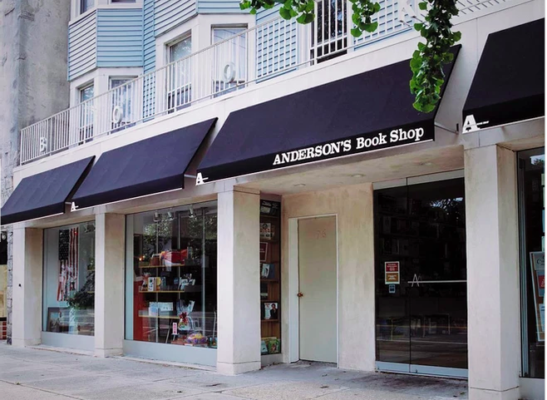 Tim’s obituary fittingly says, “His passing inspired the New York Giants to win their sixth game out of sixteen this season, a win that Tim would’ve appreciated, or at least would’ve found somewhat amusing.”

In 2018, Anderson’s announced on social media, “NEW OWNERS who are Larchmont locals – Tim Greeman and Paulene Greeman. Tim Greeman, whose Grandfather lived in Larchmont before the Larchmont Train Station was built and who went to Mamaroneck High School (MHS), when the High School was located where the Mamaroneck Town Offices now are. Tim is an alum of the Murray Avenue School, Hommocks Middle School, and MHS. His parents were the former owners of the Book Shop.”

The store celebrated a 65th anniversary in 2011.

According to his obit, Tim was a talented and dedicated fine scale modeler, winning many awards nationally for his WWII tanks and armor vehicles. Tim was a pointedly non-religious person but believed wholly in the power of fun and laughter. He was an incredible husband, father, and all-around human being. He encouraged us all to take everything a little less seriously and to enjoy life as we are living it. We ask that you remember Tim in a way that a makes you laugh, as that is undoubtedly what he would’ve wanted.

Services were conducted privately by Coxe & Graziano Funeral Home in MamaroneckFor more information or to place an online condolence, www.coxeandgraziano.com

In lieu of flowers, the family asks that you make a donation to any of the following charities:

A great loss to the entire community…we hope the bookstore continues to thrive despite all the challenges.