Throwback Thursday: Moon Over My Nanny in Larchmont 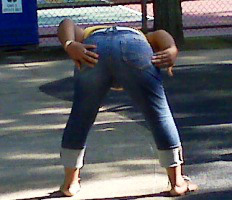 Who remembers this Suburban Passion Play?

On August 18, 2009,  a Larchmont resident and mother wrote to theLoop reporting that a Nanny caring for children in Memorial Park was reported to have yelled at two seven-year old girls in the Memorial Park bathroom because they spilled some water, and reportedly forced them to kneel and clean it up.

This incident was witnessed by the mother of one of the children when she arrived to pick her up. When she confronted the nanny, she and a group of other caregivers turned around and mooned her. The photo above was taken by someone in the playground (we had, and didn’t use, more explicit photos)

This incident was later confirmed in police reports.

Eventually the family that employed the nanny fired her.

The mother that witnessed the incident, and her husband, both lawyers, said they tried meet with the family employing the Nanny, but that request was declined by that family’s attorney,

At the time, the Larchmont mother said, “My primary motive in writing my story was to relate what happened in the hope that the family would learn of the incident and deal with their nanny.  Secondarily, I hoped that other mothers who employ caregivers would also take heed and make an effort to investigate how their caregivers behave when they think no one is watching.”

In the end, it turns out the subject of that story had managed to find a job with another Larchmont family—despite the best efforts by the parents to check her records, which were unsuccessful in revealing who she was.

As a result, that summer theLoop was the platform for dozens of comments discussing issues such as:

What have we learned?