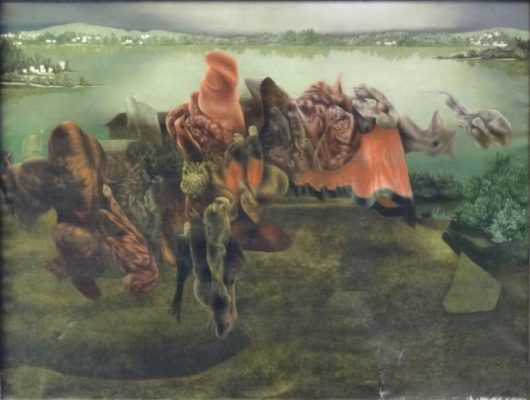 Larchmont–Clarke Auction has done it again. An appraiser has found hidden treasure. You can have a look for yourself on Sunday June 2:

Wrapped in an old sheet, Clarke Auction art specialist Nelia Moore and owner Ronan Clarke discovered what would turn out to be a “long lost and magnificent oil on canvas by the German surrealist artist Richard Oelze.”  The large and intricate painting entitled Archaic Fragment was created in 1935 when the artist was in Paris.

Say the auctioneers: “The work was included in the major 1942 surrealist exhibition, First Papers of Surrealism, in New York alongside pieces by Marcel Duchamp, Joan Miro,  Max Ernst, and de Chirico, to name a few. His most famous work, Expectations, completed a year after Archaic Fragment is part of the Museum Of Modern Art’s permanent collection.

Only a small number of pieces by Oelze have been offered at auction but when they are, they command significant prices.  Archaic Fragment may be the most important work by the artist ever to come to market and is to be sold at Clarke with an estimate of $60,000 – $80,000 on June 3rd, 2013.

Finding an Oelze under a sheet comes only four weeks after a small Russian oil on canvas by Ivan Aivazovsky sold for $75,000 against a $6000 – $9000 pre sale estimate. Almost two years earlier, two Jasper Cropsey oils sold for nearly a million dollars at Clarke after being found in a consignor’s basement.

Moore was delighted to have found such an important piece reminiscent of past discoveries.  “Only two short years later, we have come across another painting as historically important to the international market as the Cropsey’s were to the American market,” said Moore. “As the fine art specialist here at the suburban Clarke Auction, I am fascinated everyday by the treasures we uncover, but never have I been so excited about a work of art as I am about Richard Oelze’s 1935 painting Archaic Fragment.”

This painting and other important works will be sold Monday June 3rd at 5pm. In-house previews are June 1st and 2nd from 12pm to 6pm and June 3rd (day of sale) from 12pm to 5pm (start of sale). The full catalog can be viewed 24/7 at www.CLARKENY.com. Contact Clarke Auction Fine Art Specialist Nelia Moore at 914 833 8336 for inquiries.

0 Comments
Inline Feedbacks
View all comments
Previous articleComing Up: Get in the Kitchen with LHS! June 2
Next articleWeaver Street Bridge to Close for 60 Days

Coming Up: Climate Series at Sheldrake