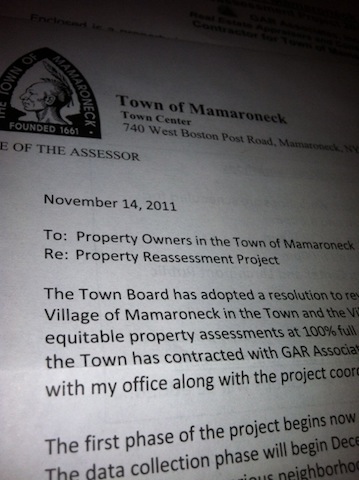 To the Editor:
Below is a copy of a letter I have sent to Mamaroneck Town Supervisor Valerie O’Keefe and the Town Council:

I agree with the concept of reassessment, but only if it is done accurately and fairly.  Clearly that is not what is about to happen.

Yesterday I received a mailing asking me to fill out a strange and incomplete questionnaire about my home, to be used as part of the assessment process.  There is no apparent advantage to me from doing so; there is no apparent disadvantage to me from not doing so or for filling it out incorrectly.  How is that fair?  How does it provide anything that you, or the reassassment people, know to be accurate?

There are to be six “workshops” about the reassessment, but what a “workshop” is is unexplained.  Remarkably, the workshops are taking place not before the reassessment methods were put in place, to get community input, and to educate the company doing the reassessment, but, rather, after, so that there will continue to be little community input (beyond anyone who showed up at a past Town Council meeting–the agenda stated that reassessment was to be discussed, but there was no Town-wide mailing, such as the one this week, asking Town residents for input, and I believe that the vast majority of Town residents do not receive the agenda).

There is no indication that the firm hired to do the reassessment, at substantial expense to the Town, knows anything about the Town, about its different neighborhoods, about the fact that the same house on an equivalent lot in one part of the Town is worth more, or less, than if it were in another part of the Town, that some areas flood, whereas others do not, that some suffer greatly from noise, whereas others do not, etc., etc., etc.  These, and other items, are basic to any fair and accurate reassessment.

Most disturbing to me is the fact that each homeowner is given the choice of letting the assessment people into his/her house, or of not doing so.  Thus those who have done improvements without permits, to avoid reassessment, will still be able to prevent the discovery of those improvements and the resulting effect on their assessments, whereas those of us who got permits will continue to suffer from having done so and from having had our assessments increased as a result.  How is that fair?

The letter the Town just sent out makes it clear that, if one does not let the assessment people into the house they will guess at what is inside and assess the property based upon that guess.  That’s accurate?  That’s fair?

Lastly, for the moment, there is no announced procedure as to how a homeowner may contest a reassessment that he or she believes in incorrect without having to hire an attorney, or a certiorari mill,to do so.

I would urge Town residents not to respond to the questionnaire they were just sent until that is done.

Mr. Engel asked good questions, of the sort “what can be correct now”? “mrsleigh” unfortunately sort of asked whether we can go back to 40 years ago, add a small band-aid, and have it resolve the issues of the 21st century.

The Council must ask real questions about municipal functions and efficiency, e.g. one point made by “mrsleigh” about “garbage pickup” and costs, and the Council must seek out real answers.

The Council must also ask, on a local level, just as is being asked on a National level, what is “fair” and how do “we” achieve it? Likely not resolved by a group of outsiders taking a look around our homes, guessing values, and assigning taxes. There’s a “House” Supercommittee that’s already similarly troubled.

Thanks for that, Larchmonter since “72. I already filled it out and sent it back, though. I agree with many of your points about the fairness of reassessment. But since there hasn’t been the political will to look at property valuation since the 1960’s, I think that is the really unfair part. Many homes have doubled in size since then. At least this attempts to right that wrong.

Instead of being afraid your taxes will go up, you may find they go down, as everyone chips into the pot their (as close as possible) fair share of the burden. This comes at a crucial time, when state and federal money is evaporating for schools. That said, there should be a clear way to contest the assessment.

The Town gave ample time and consideration to the community regarding the assessment. You can ask LMC-TV to rebroadcast, or get a copy of, those meetings.

The letter published above my name is only my opinion, I will not give “legal advice” as to any of this, and my opinion might change after I attend one of the public “workshop sessions” (which I plan to do and which I urge every one of us to do, but which should have been held well before all of this started, not now, and which should have lead to the formulation of the process rather than just telling us about a process that was carved in stone by our Town Council with a minimum of input from the public).

Our Town Council arranged all of this without actively involving the public, and thus I think that we, the public, have the perfect right to remain actively uninvolved. Filling out and returning the form, calling the number, letting a reappraisal person onto your property or letting him or her into your house are all “involvement,” as I see matters, but, then again, that’s only one person’s view of the situation.

In response to your question, I would suggest that no one complete a form, send it in or call the number in question until he or she knows far more about what is going on and about what is being done to assure us, the taxpayers of our Town, that the results of the reassessment will be both accurate and fair. This is information which may be available at the workshop sessions.

By the way, my wife and I have done work on our house since we moved here 39 years ago, but we obtained the permits to make it legal, and suffered the consequences. If you let a reassessment person into your house, or onto your property now, with others not doing so, it may be your turn to suffer the consequences.

Thank you very much for taking the time to write the letter to the Town Council and for sharing the very informative letter with us here. It’s certainly much more “education” than has been provided by our Town. Maybe there’s still time to save the Town, and us, its taxpayers, millions of dollars on what from your letter would be folly.

Guessing from your e-mail address you have “legal experience”. As you’ve urged residents not to respond to the questionnaire, do you also have “advice” regarding allowing or denying “them” access to the inside and exteriors of our homes? Should people who want to refuse access, call the phone number in the letter to deny “them” access, and/or submit a written notice to the Town?