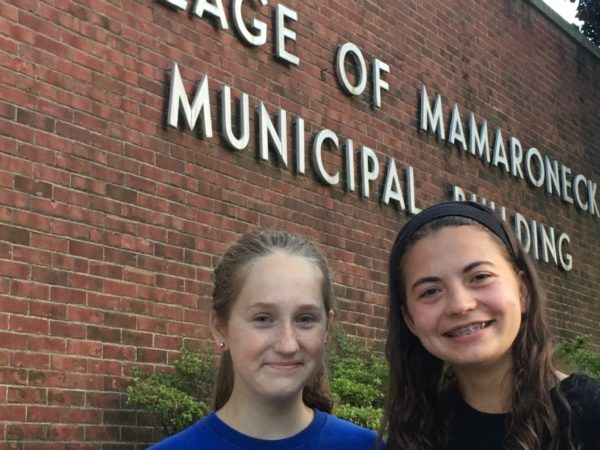 Two ninth grade Rye Neck High School students are one step closer to getting plastic straws banned in the Village of Mamaroneck. Madeline Mitchell and Shelby Gellman appeared before the Board of Trustees of the Village, urging it to enact a ban of plastic straws.

Mitchell and Gellman, both 14 years old, became passionate about the issue when they researched ideas in pursuit of a Girl Scout Silver Award, the highest award earned at their scout level. They decided that their mission was to create a sustainable environmental project to help the community.

“We chose this project because we are passionate about reducing the amount of plastic in the environment, particularly marine life” says Gellman.

The growing movement to ban plastic straws in civic communities and companies began several years ago amidst growing concern of the environmental impact of plastics in general. More than a dozen large cities across the country including Seattle and San Francisco have curtailed the use of plastic straws. Large companies such as Starbucks and Whole Foods will soon eliminate them. The New York State legislature will consider such a bill in the fall.

Mitchell and Gellman started their mission with a big success when they convinced their middle and high schools in the Rye School District to entirely drop the use of plastic straws.

Mamaroneck Mayor Tom Murphy indicated that the students’ proposal was discussed in a Board of Trustees working session and was met with great optimism. He also applauded them for bringing this environmental concern to the board’s attention. Mayor Murphy then directed the proposal to village staff to be drafted as a formal proposal before being voted upon in a future meeting.

“We are surprised that they agreed so easily,” said Gellman.