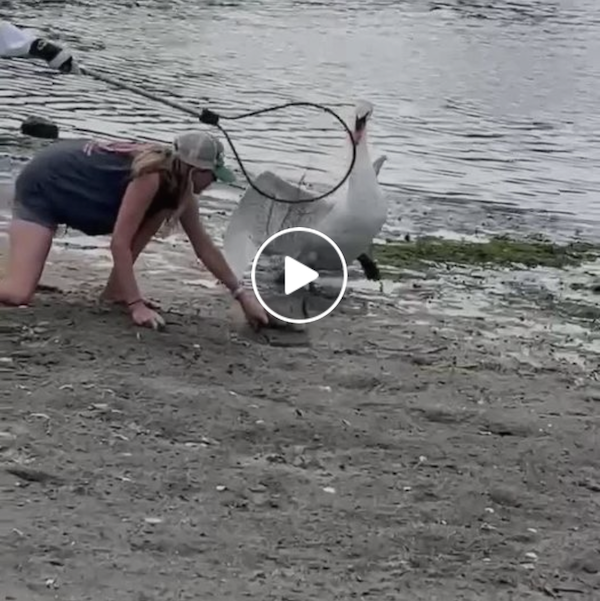 All in a day’s work.

When Kyle Troy, Director and Marine Biologist at the Village of Mamaroneck’s Marine Education Center, was called last week by one of the Harbor Island life guards alerting her of the cygnet (the official term for a baby swan) trapped by a mussel, she immediately grabbed a shucking knife and responded to find the little one in a deadly situation. The cygnet could not move and, with the temperatures in the high 90’s, would not survive long. A lifeguard kept the protective male swan at bay with a scoop net as Troy opened the mussel and released the cygnet’s foot. Swans are known to be extremely aggressive when defending and protecting their cygnets.

“I first had the net but the male was very strong and aggressive, as they should be to protect their babies,” says Troy. Once the cygnet was released Troy said, “Oh my gosh, I was like shaking cause I thought ‘I did it!'”

Onlookers cheered as the swans were reunited with the female which stood nearby with its three other offspring watching as the rescue drama unfolded. Troy who has served as the Marine Education Center’s director for 7 years says saving a swan was a first in her career.