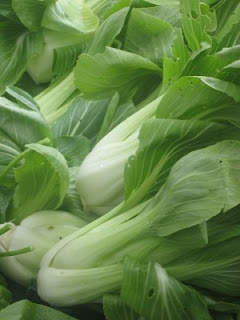 From our friends at Farm Share, who deliver fresh New York farm produce.  Recipes below.

Bok Choy —  Also known as white cabbage, or Pac Choi, this veggie has been cultivated in China since ancient times. It has a light, sweet flavor, and a crisp texture. It is loaded with Vitamin A, Vitamin C and calcium, and low in calories.  The green leaf is often cooked separately to the much thicker, paler stalk.

In a stir fry, cut off the stalks and slice. Cook for a couple of minutes before adding the leaves for 2 minutes.

Use in stir fries, chopped in salads, braised, roasted or add to a soup for the last few minutes of cooking.

For a quick side dish to serve with steak or duck, steam for 3-5 minutes. Serve with rice and soy sauce.

Directions
Heat olive oil in a large sauté pan on medium high heat. Add onions, then garlic, then bok choy. Sprinkle with sesame oil and salt. Cover, and let the bok choy cook down for approximately 3 minutes. (Like spinach, when cooked, the bok choy will wilt a bit.)

Remove cover. Lower heat to low. Stir and let cook for a minute or two longer, until the bok choy is just cooked.

Ginger-Sesame Chicken with Bok Choy and Mushrooms
Food and Wine, 2009

2. In a large nonstick skillet, heat 2 teaspoons of the canola oil until shimmering. Add the oyster mushrooms and cook over high heat, stirring occasionally, until browned and tender, about 6 minutes. Transfer the mushrooms to a large plate.

3. Add another 2 teaspoons of canola oil to the skillet. Season the chicken breast pieces generously with salt and pepper, add them to the skillet and cook over high heat, stirring occasionally, until they are golden and just barely cooked through, about 4 minutes. Transfer the chicken pieces to the plate with the oyster mushrooms.

4. Add 1 tablespoon of canola oil to the skillet along with the bok choy and red pepper and cook over high heat, stirring occasionally, until crisp-tender, about 3 minutes. Transfer the vegetables to the plate.

6. Transfer the chicken and vegetables to a bowl and serve.