Modern street art depicting famous faces, indigenous people, a gigantic ship, an even an iconic local house are colorfully popping up around the Village of Mamaroneck this week. One mural even attracted a visit from a popular movie actor.

Six prominent street artists from around the world began creating multiple murals throughout the village. Blank brick and stucco walls which, until this week, went unnoticed are being transformed into images depicting not only the history but the sense of community in Mamaroneck. Working from palettes of gallon paint cans, spray paint and rolling brushes the artists can be spotted reaching the heights near rooftops from atop blue work lifts.  The Historical Murals Project is sponsored by the Mamaroneck Historical Society, Village of Mamaroneck Arts Council, and Street Art for Mankind, the Larchmont-based nonprofit organization producing the project.

The artists began working over the weekend and each day this week you can watch the murals take shape. On Mamaroneck Ave, artist Shalak Attack of Toronto works on faces of a mother and her baby symbolizing indigenous people. Two other artists, Mr Cenz and Bruno Smoky are creating paintings which have turned the parking lot behind Miller’s Toys into a street gallery. Other muralists are Frank Parga, Loic Ercolessi, & Victor Ash.

On Monday, Matt Dillon, the actor who has starred in several movies including Flamingo Kid, There’s Something About Mary and The Outsiders, surprised artist Mr. Cenz, who is working on the mural depicting actors from Mamaroneck including Dillon. Mr. Cenz posted the meetup on Instagram.

According to Gail Boyle with the Mamaroneck Historical Society, the topics of the murals were selected after listening to large groups of local residents. “Each was selected to  symbolize the cultural and historic themes of what resonates as being part of our community.” 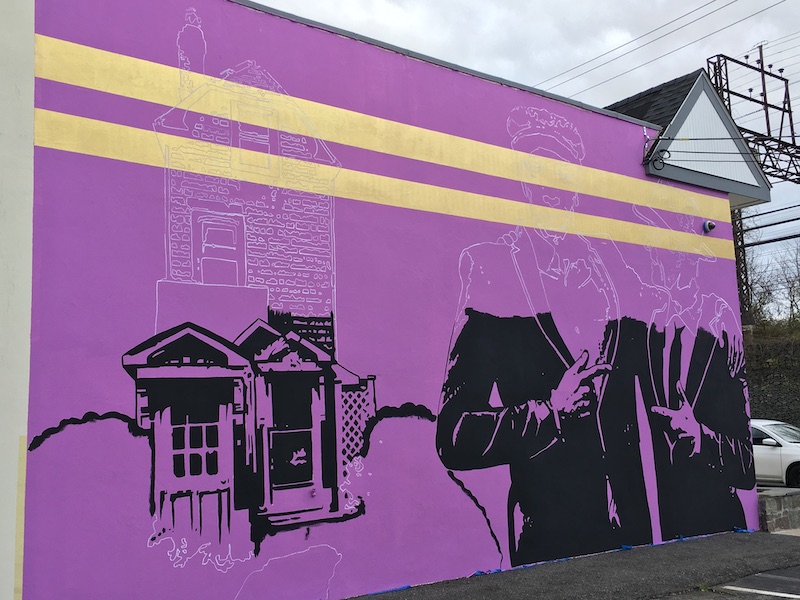 The historic “Skinny House” is highlighted in a mural located at 135 Hoyt next to Half Time store. Julie Seely, author of Skinny House, A Memoir of Family, says the mural illustrates the diversity of and acceptance that made it possible for Nathan Seely build a business and establish his family here.

A special presentation by Julie Seely on the The Skinny House will be held Tuesday, 7:30pm at American Legion Post 90 Hall, Mamaroneck.

Events celebrating the murals and conversations with the artists are offered all this week.The week-long program culminates in an inaugural Art Walk and festivities on Saturday afternoon, April 20, starting at 1:00p.m

Full list of events can be found here  https://www.eventbrite.com/e/mamaroneck-historical-murals-tickets-60251895040

More information on Seely’s talk can be found here. https://www.village.mamaroneck.ny.us/pages/mamaroneckny_webdocs/skinny_house_flyer_final_2.pdf

Wow! The murals in Mamaroneck are beautiful! Each so unique and inspiring. I love driving by them with my kids and talking about each one!!