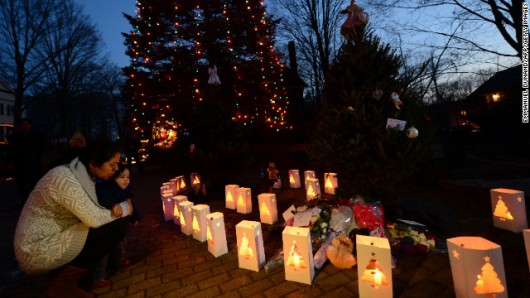 Just 50 or so miles away in Fairfield County, a neighboring county, life in Newtown, Connecticut has many similarities to our own: a large population of young children, neighborhood schools, close knit neighbors, a general feeling of relative safety.

But you don’t have to feel similar to feel grief.

In Rye Sunday, the City planned a candlelight vigil for 5:30 p.m. on the City Village Green at 1051 Boston Post Road, as have other communities around New York and the the world.

Local school administrators have been in communication with parents about ways to help children through this difficult time. One local Principal writes, “Administrators, teachers and our psychologist…will be very mindful tomorrow that returning to school may be difficult for some children.”

Police said the shooter, who forced his way into Sandy Hook Elementary School in Newtown Friday was Adam Lanza and that he killed his mother, Nancy, in their home before walking into the school and spraying  26 more people  with bullets, 20 of them children no older than 7.

The rampage ended when Lanza apparently took his own life in a classroom. With him were three firearms: a semiautomatic .223-caliber rifle made by Bushmaster and two handguns, a Glock and a Sig Sauer, according to CNN.

Connecticut law requires gun owners to be at least 21. The guns, authorities said, belonged to his mother.

Over the weekend the names of the children were released: