Home Food & Dining Smashburger, Do You Kiss Your Mother with Those Feet?
Food & DiningTownsMamaroneck

Smashburger, Do You Kiss Your Mother with Those Feet? 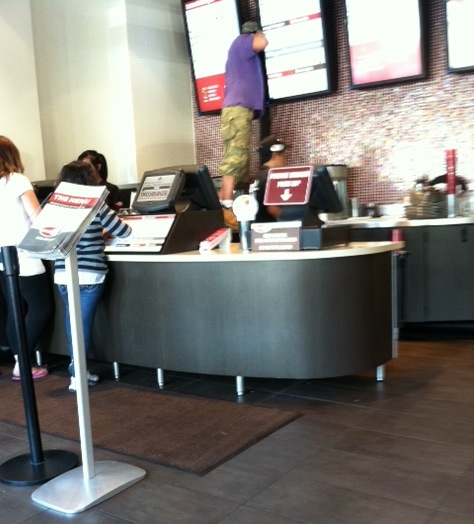 Someone in theLoop sent us this Thursday:

We just returned from taking out at Smashburger, where a technical worker was attending to the computerized menu boards by standing, in his work boots, directly on the stainless-steel counter top behind the register.  (He was deathly close to one set of milkshake mixers, blocked by his legs in this photo.)

I very politely told the server that unprotected work boots on a food-prep area was a huge health-code violation.  She smiled and thanked me, and continued with my order.

I persisted, and said they could get fined if someone saw that, and she thanked me and shrugged her shoulders. The manager was around, but he didn’t seem to care.  (My daughter was so mortified that I had mentioned it to the server and taken pictures that I decided not to talk to him about it then.)

The worker was up there the whole time we waited for our take-out order, on his cell phone evidently with tech support. He even ran outside and then back in, and back up on the countertop. EWWWW!  I mean, could they have put a towel down for him to step on? Why didn’t the worker have the protective booties you wear during an open house?

The burger was okay, fries kind of cold.

Is this really “newsworthy”? I think you need to find something better to do with your time if this passes editorial muster. Do you actually investigate anything or is it acceptable in this day and age of “journalism” to just post any random rumor / innuendo that floats across your inbox? Did you follow up and ask any of the questions in the first comment from ” me”? Of course not. Do better.

This should have been posted with at least a managers comment. Was everything cleaned up afterwards? It a towel was put down would that have made the burger better? In the end you really were not concerened as you still ate there.

It seems like, if they weren’t preparing food on/around the counter while he was standing on it, and they sanitized it afterwards, this may not be the worst thing in the world.

Oh good grief, it’s just dirt. There’s far worse things in food you eat every day. Find someone else to worry about, like whether Snooki should really be allowed to have a driver’s license.