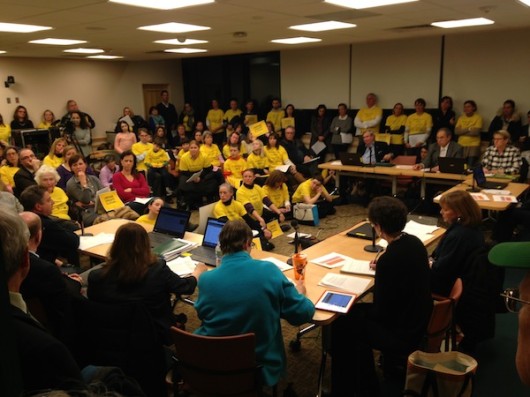 An expected rally before Tuesday’s Mamaroneck school board meeting brought out more than 100 people opposed to a move that will cancel busing to many private schools in the next school year. 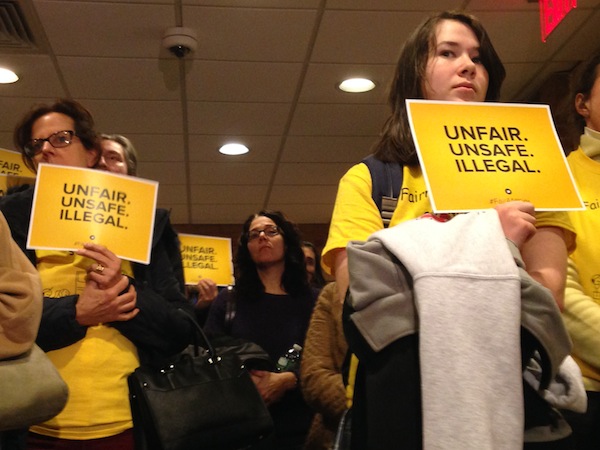 Kristin Degen, the mother of five children, said, “The school board is telling me to put my children at risk because they cannot find a way to balance their budget.  If I overspend on my household budget, am I entitled to put someone else’s kids at risk?  It’s an issue of fairness and safety.  It’s a matter of principal.  It’s just not right.”

She says that due to the change in school district busing policy, three of her children will see their daily commute to and from school nearly triple – from under an hour round trip to two and a half – and be forced to walk just under three and a half miles each day, regardless of weather and safety concerns.

photos: Fairness for All Kids Coalition

My daughter went to Windward for 3 years. Like most Windward students we paid for our daughter to go there and the District paid for her busing. She went to Windward because she had a learning disability. Prior to Windward she received additional services from the District -Resource room/sp ed teacher and Speech therapy. So 3 professionals were involved in her education These were mandated in her IEP .Windward students are there because of a learning disability and probably the district is providing extra services to them . Speech therapists only have so many hours in a day and Resource Rooms have a lower cap than a regular classroom . Extra services =extra expenses . There is a different tipping point in this population

The marginal cost to absorb children where a segment is not added is 0 and the board took into account the likelihood of some children returning to the district.
The cost of educating a child includes all the overheads. Adding a child to a class does not add any additional cost. Further, the opportunity in the transportation policy is not only $140k, there is $1.16mm spent on transporting all the non-IEP children (461) and the savings over time through more eliminations will increase dramatically.

Tax payers in the community are demanding lower increases, the board is only doing what is responsible to protect the quality of the education in the schools to keep the taxes low and to maintain the property values for the other ~30,000 residents.

There is ABSOLUTELY a cost to absorbing more children into our system AND more workload for teachers. There is a cost to educating every individual child in our district; otherwise we would not be having this discussion. More children, bigger class sizes, more workload. And it is not just the children returning to public from private. There will be a long-range increase. In-district children who require busing are next on the chopping block. To present to the world that this is how we interpret “safe busing” of students, public or private, who live a certain distance from their schools, as required by law, is an embarrassment to our community.

What the Board and community fail to see is this supposed $140,000 savings will be more than offset by the increase in the public school population. Just a couple of the kids who can no longer get to school and return to public will cost more than $140,000. On top of that, relocating families with private school kids will not choose to live here. They will choose a community that buses. Over the years, we will morph into a community with close to a full public school attendance. Then let’s see where we’re going to have to budget cut. This is a disastrous policy. I’d love to see any of the school board members subject their kids to some of these commutes on a daily basis.