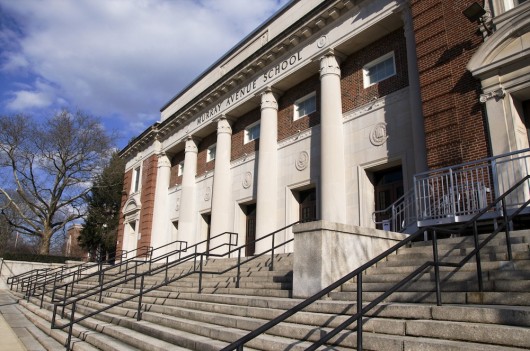 The group Fairness for All Kids says it took the legal action because “Education Law § 3635(1) requires non-city school districts – including the Mamaroneck school district – to provide transportation services to all resident children living within aspecified mile range of their school, whether they attend public, religious or private school. However, the District’s new Student Transportation Policy 8412 – which was adopted by the Mamaroneck Board of Education on April 8, 2014 – reverses the District’s long-standing practice of providing transportation by private carrier to students in grades 9-12, and requires nonpublic school students as young as 13-years-old to travel to and from school via public transportation.”

The group claims The District has also stated its intention to dismantle the busing program for middle school children in the future.

Highlights of the proposed budget include:

“This year’s budget reductions amount to nearly $2 million in cumulative savings,” according to a District press release, “following on the heels of several years of reductions that have included the elimination of more than 40 staff positions since the ’11-’12 school year budget.”

Residents can vote on the proposed budget Tuesday, May 20th at one’slocal elementary school.

Per Shaps, the District will vigorously defend its position. I am not a member or backer of Fairness For all Kids. I do, however, have tangential interests in the area and am always shocked by the forest/trees issue that gets in the way with Mamaroneck matters. So this time around the District wanted to save $140k and thought that cutting some transportation would cure the problem. On the one hand you have a bunch of Mamaroneck bandwagoners who walk around in yellow t-shirts and speak up at meetings without knowing anything about the actual issue, and whether their families are covered or not by the current (new) policy. These folks were not the Fairness folks, but “heard from someone” that the District was cutting some busing, saw a “cause” opportunity and jumped in, perhaps thinking they were affected. The Fairness folks are looking at this from a policy and precedent standpoint. Others, whose kids ARE attending the Mam public schools, should be concerned as well about the new policy because even if their buses were not cut now (attention you Hommocks parents), it could be cut next year.

On the other hand, you have a Board which can’t help tripping over its own feet. So there is (as usual) a budget issue in Mamaroneck? Fine. The District spends approx. $24k per student, at least at the high school level. The District has cited increased demographics as a major reason behind the need for further cuts (more kids in schools equals less money for all those budgetary items). OK, HOWEVER, the 1st paragraph of 8412 is pretty clear:

Has the District (this is a rhetorical question) ever considered doing what MANY other school districts do nationwide? REQUIRING (not just saying they require it but actually doing it) copies of the prior year’s tax returns for registration of new students and periodic verification of tax return filings for current students? I would bet that there are at least 6 students in the district who “ILLEGALLY attend” school. Some might find taxpayer subsidization of students attending school illegally at least as reprehensible as taxpayer “subsidization” of busing for non-district schools (the Fairness folks), esp. when some of the folks who use district busing to send their kids to non-District schools are taxpayers…..I have more sympathy for taxpayers who use district busing to send their kids to non-district schools than I do for non-taxpyers who eat into District money and cause the District to cut expenses which in turn affects District children of taxpaying families….

For all the money that this group wants to spend in suing the district they could hire a private bus. I hope if they are working for “Fairness” that they plan on including the district kids in their lawsuit that currently do not get a bus and have to walk on streets with no lights, sidewalk and crossing guards.
That might show that it is not just sour grapes, but that they really do care about the kids and not just their pocket books.
I would suspect not since these people never stood up before and said that ALL children should get a bus!

Fairness for All Kids
Reply to  Jonathan Sacks

If you are unhappy that your children do not qualify for school bus transportation under the law, you should be fighting to CHANGE the law, not attacking families who are defending their rights under the law. The Fairness for All Kids coalition has always stated that it defends the rights of all eligible children to receive school bus transportation, and that is why they fought so hard to stop the District from taking yellow school buses away from Hommocks students. The law is clear that the only criteria for determining whether a student qualifies for yellow buses is their distance from their school.

Jonathan Sacks
Reply to  Fairness for All Kids

I am not “unhappy” that my children do not get a bus (it is inconvenient, but I understand my responsibility).
I would rather have the money spent on teachers for my children. $1.16mm (that is million!) is spent on transporting non-IEP/Special Ed children out of district, this can no longer be afforded.
I will not support busing for private school when it affects my in-district child’s education. So don’t attack me for looking at the bigger picture.
Also, that you “fought for the Hommocks bus” is garbage, Hommocks was never on the agenda for a cut this year only the policy to give the latitude to the district to make cuts to Hommocks if feasible and necessary. That is prudent.
I will be directly impacted by a Hommocks yellow bus elimination for the next 7 years and I support it if necessary to keep up the quality of education and to keep taxes under control.
All of you efforts are focused in the wrong area, they should be addressed to Albany to create reforms on pensions and towards the unions for give backs. These are the issues driving the cuts. If you stood in Yellow shirts in front of the legislators to help eliminate Triboro and to create pension reform with the same effort you put into this issue, you perhaps could be effective.
What I find as selfish is the attitude of threats from this group. The tactic of posting private phone numbers on your web site and the lack of civility you show towards other community members and the board. Although you are a vocal group you represent a minority and the majority has given their support on this issue to the board for the reasons I state above. These are the people voted into the job by the people and you don’t want to accept the democratic process and instead resort to extortion tactics.
You should be working on bringing the private schools into the solution by creating a transition plan that reduces pain over the next few years not trying to cost the district more money which will in turn weaken our schools, reduce our property values and do nothing more than galvanize the balance of the local population against you.

I found the Board members phone numbers in the school calendar . Why are they there if not for phone calls Do they have unlisted numbers and taxpayers cannot call them and complain??? Really if they cannot take complaints or phone calls then they should not be on the Board .and they should stop whining This a well organized group and that is problematic for the Board When are you going to Albany to fight for pension reform???.

I thought the democratic process allows people to organize into a group and protest . Members usually write letters and make phone calls to elected officials . I thought citizens had the right to do this .Apparently you are against citizens doing this . So organizing ,calling elected officials who wanted this job and have their phone numbers published in the school calendar and writing is extortion .?? Then using the courts to protect their rights after going thru the process is extortion ?? Just cause a group does not accept the outcome and pursues their cause thru the courts is not extortion . That is the democratic process and a right to defend what they believe is a legal right ..Not a desire to squash peoples rights . What about the issue that most of the schools losing busing are catholic schools ??

I called the board on another matter asking a question they did not want to answer and left messages . No one called me back . They wanted this job . no one forced them to run for the job .