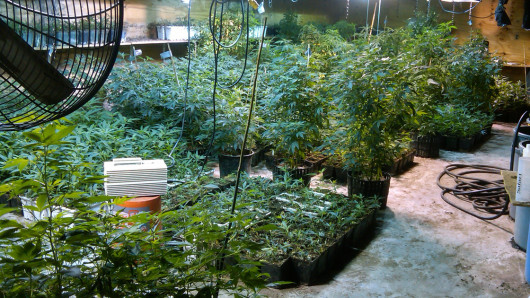 The world is  scrutinizing the real housewives of Scarsdale after the pot bust that’s made national headlines- that of a Scarsdale mom of two with a now former career as pot queen.

“Andrea Sanderlin, a mother who drives a Mercedes SUV and lives in a large Scarsdale, N.Y., home, is facing serious drug charges after federal investigators accused her of being the mastermind behind an operation growing nearly 3,000 marijuana plants in a warehouse in Queens,” says NPR.

“Before she was busted, Sanderlin appeared on the surface to be just another well-heeled divorced mom who took horseriding lessons and doted on her daughters, Zoe Quinones, 13, and Harlow Garcia, 3,” says the Daily News.

This fascinating story was broken by the Smoking Gun.

If you are not planning to read anything else, know that the names of the children should be removed immediately.
The names of this woman’s children should not be listed in this article. It is sad that children have to brought into this. I feel terrible for the family, whether the woman is found guilty or not. I think that everyone here can agree that this story making its way to national news (one being 6/5/13 Today morning show) would be traumatizing for the kids to not only hear there mother’s name as a suspect, but their own names as well. The fact that there is a minimum of 10 years in jail if found guilty could cause enough physiological distress, but posting the children’s names in the article is plain sick. They should not be involved. Please, to whomever wrote this article or was involved in the writing of this, please make the changes now. Thank you.

Please remove the names of the children. It’s cruel, irresponsible, and unethical of you to list them here. It’s common practice in journalism to shield the identities of minors; don’t you have a policy on this? You are needlessly adding to their pain as well as recklessly exposing their identities to the whole wide world.

You’ll have to speak to the Daily News about that.