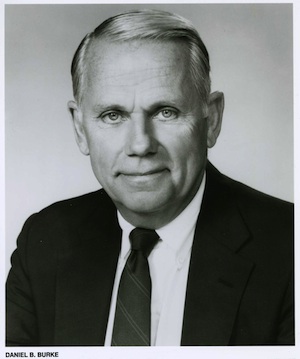 Mr. Burke, whose distinguished media industry leadership spanned broadcasting, cable and publishing, joined Capital Cities in 1961 as General Manager of WTEN-TV in Albany. He was elected a Vice President of the Company in 1962 and, in 1964, was appointed General Manager of WJR-AM/FM in Detroit. Mr. Burke became Executive Vice President and Director of Capital Cities in 1967, and he served as President of the Publishing Division from 1969 to 1972.

During more than three decades at Capital Cities, Mr. Burke earned the respect of generations of media professionals for his business development acumen and his commitment to corporate social responsibility. Though his earlier accomplishments came without much public fanfare, that changed on Jan. 3, 1986 with Capital Cities’ acquisition of the American Broadcasting Companies – thrusting Mr. Burke and his long-time friend and business partner Tom Murphy into the national spotlight. At the time, it was the largest non-oil merger in business history.  Ten years later, on Feb. 9, 1996, the Company they had built, Capital Cities/ABC, was sold to The Walt Disney Company.

Following his retirement from Capital Cities/ABC in 1994, Mr. Burke turned his attention to creating a minor league baseball franchise — the Sea Dogs – in Portland, Maine.

Mr. Burke’s civic activities included service as a Director of the Partnership for a Drug-Free America and Chairman Emeritus of New York Presbyterian Hospital (now Columbia Presbyterian) in the City of New York.

In 1990, President George H. W. Bush appointed Mr. Burke to the Hungarian-American Enterprise Fund, established to manage funds appropriated by Congress to promote the private sector in Hungary. He also was a member of the Board of Trustees of his alma mater, the University of Vermont, for a six-year term, with the final year as Board Chairman. In addition, he served on the Boards of American Woman’s Economic Development Corporation, The National Urban League, Cities in Schools, Morgan Stanley Group, Inc., Consolidated Rail Corporation, Rohm and Haas, Darden Restaurants and The Washington Post Company.

Prior to joining Capital Cities, Mr. Burke worked for General Foods’ Jell-O Division in various capacities from 1955 until 1961.

He is survived by Harriet “Bunny” Burke, his wife of 54 years, four children:  Steve Burke of Philadelphia, PA, Frank Burke of Chattanooga, TN, Sally McNamara of Wellesley, MA and Bill Burke of Cape Elizabeth, ME, and fourteen grandchildren.

A visitation service will be held at the Graham Funeral Home, 1036 Post Road in Rye, New York on Sunday, October 30 from 3:00pm to 7:00pm.  The funeral service will take place at St. Martha Church, 30 Portland Road, Kennebunk, Maine on Tuesday, November 1 at 11:00am.

In lieu of flowers, his family requests that donations be made to Maine Medical Center, The Partnership for a Drug-Free America and the Naomie Berrie Diabetes Center at Columbia University Medical Center.

Turn on the lights. This year Mamaroneck and Larchmont residents are encouraged to commemorate September 11 in a new way.
Read more
Larchmont

The Larchmont Loop began publishing in October, 2007 when a multi- Emmy Award winning Journalist recognized the need for local news right here at home.theLoop was one of the first hyperlocal news sites in the U.S., and now receives more than 100,000 visits a month. We bring you all the news and conversation in Larchmont, Mamaroneck and the surrounding area.