Should you be practicing Transcendental Meditation?

Or maybe the route for you is Prozac.  Do martinis help to take the edge off and make you likeable? 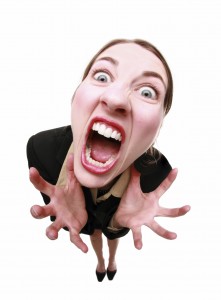 Although these are all highly popular methods for stemming adult anger, the Mayo Clinic suggests first asking yourself to take a time out, the first in its 10 ways to tame your temper.  And although these tips should be an integral part of who you are, Using Humor to Release Tensions (no. 9) doesn’t always work.

Last week I found myself in the underground parking garage of the White Plains Target. I found myself there because I had not bought a present for our twins %##!%% classmate’s 3rd birthday party which had come and gone.  Like self-involved opportunists my kids had shown up at JW Tumbles empty handed and crying.

Standing at Target’s Parking Pay Station, I was digging for my three quarters while repeating 0029 to myself so I didn’t end up paying for some other bleeping car since getting slapped with nonsense parking tickets was a specialty of mine, particularly when I was someplace that had drawn me there to score a deal.  Sort of a Murphy’s for Morons Shopping Law.

Leaning against my cart, a mother and her daughter passed, another younger daughter followed behind, head in Slurpy cup, meandering in my direction.

I was mindful.  What some psychologists might call in Cognitive Behavioral therapy, in the moment, but what others might then call passive-aggressive.   I thought the frickin’ kid would look up, but she knocked into the cart, just as her mother bothered to turn around.  Glaring at me as though I had rode in on the back side of my cart like the G.D. Grinch returning the gifts, inadvertently knocking the child off her feet, when in fact not a drop of the Slurpy was lost by this sadly sugared up tyke.

The mother would have benefited from knowing that no.5 on the Mayo clinic list is, Think Carefully Before you Say Anything.  Instead it was, “You slammed your cart into my kid.”  As she approached me, the girl now looking really wide-eyed, she bellowed that I needed to apologize to the child who was suddenly sobbing.

People had pulled their carts over to watch.

Was I going to be that cool-cat girl that once got promoted to Senior Manager after passing a test at a bar where my Vice President, known for his table top dancing, ranted demeaning misogynist slander my way and then granted my advancement after I didn’t scream back? (No. 6 Mayo Clinic, Identify Solutions to the Solution).  Could I still be that Zen, when back then my stress factors included only what happened to single, childless me, a fairly manageable control group?

But what no one could predict in that poorly lit garage was that the back injury that caused my kids to show up at a party empty handed and had forced me into this underground Michael Vick stand-off, set off my fight vs. flight response into overdrive.

“Why aren’t you watching your own child instead of letting them walk into people?”  I was suddenly Al Sharpton, sensationally accusatory.

Was she angry at me because her husband had said he was going out for a pack of smokes, and the S.O.B. never returned?  Instead of being sympathetic to this mother’s hard living face and her children’s Grapes of Wrath style of dressing, I was in my own narcissistic rage, having no ability to be gracious; my friggin’ slipped disk prevented it.

I was suddenly and acutely aware of the probable pain that the Birthers and other crusaders of pursuits that amount to nothing more than an echo in a suburban garage, must be in.

I was no better than George Costanza and his family of screamers, reacting to the world so that someone would feel my pain. I was suddenly united with any number of purported mamby pamby ‘news’ personalities, hoping and pleading for someone, really any one, to pay attention.  What must the numbers look like on physical or mental pain with the all of us screaming about something?

I did flee into Target, plagued by the exchange, un-TM like, revisiting the past and letting my mind have loads of chatter instead of being able to successfully focus on the Dollar section.  I could barely make a decision on a stripe tank versus plain white, aware enough to know that the look of vertical stripes could set off a chain of self-loathing, only re-starting the loop that leads straight back to anger and even public confrontations.

But there are endless tools without paying someone to be your ‘listening to your crap for money friend’:   For $495.00 you can take a 26 hour class from Anger Class Online that is not only verified by the BBB, but you receive a Certificate of Completion for those of you court-ordered to complete such a course.

But if it makes your blood boil thinking about wasting all that time, you can drink two 2.5 ounce cans of I AM BLISS, the new meditation drink that not only enhances your meditation time itself, but ‘utilizes a proprietary combination of natural ingredients that support optimal brain function, decrease stress and anxiety, balances energy and relaxes muscle tension’.

At SuccessConsciousness.com, David Leonhardt offers Eight Simple Anger Management Tips like the old counting to ten, with slow deep breaths between each number.

What he does not recommend is “venting” your anger, an omnipresent personality trait if I ever saw one.  He says that venting begets more venting.  Leading to what, the Tea Party?

If the constant grandstanding we’re surrounded by weren’t so tiresome, it might be @%!$% funny.

Kim Berns is a writer and designer living in Rye.

“underground Michael Vick stand-off”? Ouch. That was a really horrific case of animal abuse. It personally offends me that you use it jokingly to describe your anger issues. The dogs in his fighting ring were not “angry” as you or I experience. Rather they were provoked, threatened and taunted into survival mode resulting in death or severe injury both emotionally or physically.
I don’t think you meant to put down the incident as I am describing it, but I have to speak up for the speechless when they are not accurately represented.

Thanks for the story Kim and best wishes.

Nothing it seems generates anger around here like parking and traffic.
If only someone could invent a pill to channel that anger into solutions to those problems and into solution to more significant issues, we might have another Westchester billionaire in the making :-)

Me, I’m all for venting. But you have to be in good enough shape to run like h— afterward. To avoid confrontation, you know. Hope your back is well soon!

0
Reply
Previous articleWalk Me a Story
Next articleNew Report: What’s in our Air?