It took two years, but the Larchmont Meateria has finally changed hands, an event anticipated even in the New York Times. 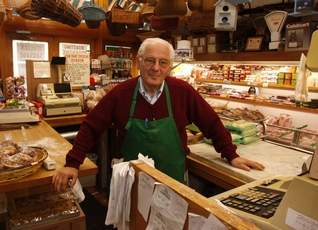 But regulars of the Village’s most venerable butcher and grocery story apparently don’t have to worry that the new owners are going to change the way Victor Ciampi has been doing business there for 40+ years.

“Everything is going to stay the same,” said Mamaroneck’s Flora Guglielmo, who, along with her son and daughter, bought the Addison Street store after 30 years as shoppers there.

“We may try to expand a little bit at a time but basically it’ll be the same place,” she said.

A former high school nurse, this is Guglielmo’s first foray into the food business. But, as the daughter of a chef, she has no doubts that she’s well equipped to keep the quality and spirit of the Meateria alive and well. And will no doubt, once again,  sell more than 1000 tenderloins between Christmas and New Year’s.

Victor! I’m going to miss you! I can remember being a little girl and him smiling and giving me a free cookie every time! Please don’t stop that tradition! God bless and good luck to the new owners. Please keep the place the same!

Bummer … a truly nice place. A place where you didn’t mind paying a little more b/c you got your money’s worth in quality and service. Good luck to the owners, both old and new.

Victor
Good luck to you.
We know you since your days next to the train station. You are the best.
I know you will be missed by all

VICTOR!
WHERE DO WE BEGIN TO THANK YOU FOR 40 YEARS OF FRIENDSHIP AND WONDERFUL MEMORABLE MEALS? YOU WERE ALWAYS SO KIND AND GRACIOUS WITH YOUR TIME AND CONCERN FOR ALL YOUR CUSTOMERS AND TREATED EVERYONE WITH RESPECT AND HONESTY. YOUR KNOWLEDGE OF THE FOOD BUSINESS WAS UNPRECEDENTED AND WE’LL NEVER SEE THE LIKES OF YOUR KIND AGAIN. THE TOWN OF LARCHMONT HAS LOST A GREAT FIXTURE, NOT THE STORE – BUT YOU.
YOU ARE THE LAST OF THE BEST.
GOD BLESS YOU AND YOUR FAMILY – AND THANK YOU FOR ALL.
ROGER L.
(CUSTOMER FOR 24 YEARS)