Rumorville: Retail Moving Back, In and Around

Back: Those of us who like a little Soho in our Suburbs are thrilled to hear of the return of Avenue P! You may recall Andrea 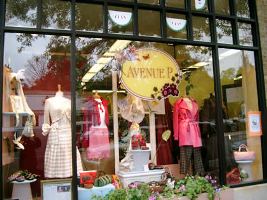 sold Upscale Bohemian clothes and accessories before everyone else coined the phrase; eclectic with a French influence. They were in the space now occupied by Palumbo bakery on Chatsworth Avenue in Larchmont, but in about 3 weeks you will find them opening in a small space on the Boston Post Road (a former hearing aid store) next to AAccess Computers and around the corner from the Larchmont Library.

In: Larchmont Mom Debbie Ausch brings her Prodigy Learning Center to the Palmer Avenue Space just vacated by Palmer Art and Framing (who moved to Larchmont Ave. into the old Soupz)

Around: and REcologie, who will recycle soda can tops, gum wrappers and seat belts into cute bags, wallets and accessories, moves from their current location on Palmer Avenue (near the Larchmont Playhouse) into the old Michou space (next to Aroma) across the street on Palmer in October.

Goodbye to Tung Hoy–torn down today! Anyone know what’s happening there? Not sorry to see it go, except for those lions. Maybe they’re sitting in someone’s living room or garden now–a genuine piece of Mamaroneck memorabilia.

Signs of an economic rebound? Got my fingers crossed and, perhaps, my wallet open! Thanks for mentioning AAccess Computers as I couldn’t remember the name and I need to bring a computer there to recuperate from a virus!
editrix they’re pretty good, too…