One of Larchmont’s most iconic buildings, the 1922 Trust Company of Larchmont, now one of two Chase Manhattan bank branches at the same intersection, 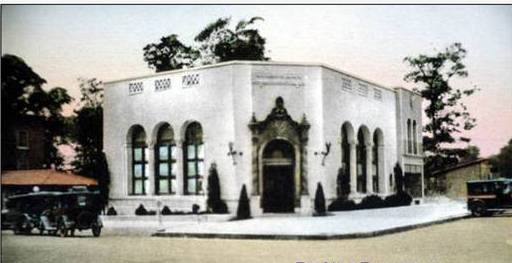 will close Saturday Nov.13 and the branches will consolidate into the newly renovated branch diagonally across the street (124 Chatsworth Avenue.)

But who will move in?

Mayor Josh Mandell says, " We are hoping that someone will snap it up quickly But as of now we haven’t heard anything."

Frank Blasi, Larchmont’s building inspector, says he has not received any inquiries, and raised the possibility "they could keep it as offices" (but was simply speculating.)

What do you think should go there?

A partial timeline of the building:

I was just wondering today what that bank was named in the beginning. Thanks for the informative story.

It would make a great retail space. Pity the bank will keep it.

Chase doesn’t want another bank on that corner (I agree – we certainly don’t need more banks here) and will keep the lease for that reason.

Whatever is done, I hope the historic building exterior and aspects are retained. The Larchmont Historical Society is a resource towards that end.

A rumor of Patisserie Salzburg taking the space has made the rounds.

I am a high volume CHASE customer. Management has said for more than a year that they will be keeping the building and using it for office space – though I think it would make a great restaurant with candlelight dinners in the vault.

0
Reply
Previous article
In Mamaroneck, Author of The Shack: the Secrets we Keep
Next article
Brownies Thank our Vets