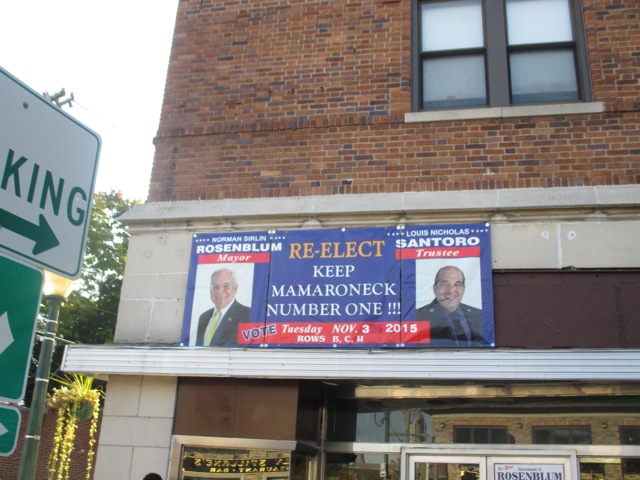 With elections only about a week away, since we have had so much discussion here on the legality of Mamaroneck Village Mayor Norman Rosenblum’s election campaign signs, we thought you might like to see video of the candidates’ debate Oct. 22 when the issue was raised publicly.

The Mayor did not respond to a request for comment.

I guess that the size of signs is a moot question at this juncture…..:)

Regardless of whether or not it is ruled unconstitutional in other jurisdictions, the code has not been changed in Mamaroneck and everyone should be following the rules until such a time as the Village Codes are changed. It sets a horrible example for the Mayor to be skirting the Code.

That is the point. Thank you. As a public official we are required to follow and enforce the laws in our Village. If we buck the system, then others will too – and that’s the sentiment that is created by the Mayor in the Village of Mamaroneck. Please come out and vote on November 3!

Take, for example, the ruling saying bans on same-sex marriage are unconstitutional. This takes effect as soon as the ruling is handed down. Same-sex couples who want to get married didn’t/don’t have to wait for the Kentucky or Tennessee legislatures to re-write their laws, because those laws have been deemed void by the Supreme Court.

The same thing applies for the Village’s sign law. The Supreme Court, in Reed v. Town of Gilbert ruled that sign laws that discriminate on the contents of the sign (political v. commercial) are unconstitutional. This is the final word, and residents do not have to wait for the Board of Trustees to change the code to something constitutional.

If the Village attempts to enforce the sign code despite the Reed ruling, the Village opens itself up to being sued under Federal civil rights laws. In fact, if the Village doesn’t change the code to make it constitutional, any resident who feels censored by the sign law has standing to sue.

If anyone is reading this and has received a ticket or Order to Remedy over a political sign (regardless of which campaign they support), please contact my office at 914-341-1364. We are providing free representation to any Village resident or property owner affected by this unconstitutional law.

Thank you Mr. Hallstrom, for explaining that if a law/practice is ruled unconstitutional by the Supreme Court, all laws everywhere that are the same or have the same unconstitutional effect are null and void, without any further action, and that there is no need for anyone to comply with the local law until it is amended to conform with the Reed v. Town of Gilbert ruling. I much rather hear what an ATTORNEY has to say about this than to hear about it from non-professionals.

They take lessons from *Mr Obs !!

I find it odd that in an hour and a half discussion, you would target minutia like the size of signs for discussion, especially since the Village Code which addresses political signs was rendered unconstitutional by a Supreme Court decision four months ago (Reed vs. the Town of Gilbert, AZ). This has been brought to the attention of the Board of Trustees by the Village Attorney.