In response to discussion here, the Town of Mamaroneck has posted its regulations regarding hunting.

As far as the deer found on the Leatherstocking Trail (see below), Town Environmental Planner Elizabeth Paul says, “It is not known what property the deer was on when it was shot, but it died on Town property.  As a reminder to residents, Hunting is prohibited in any of the Town Conservation Areas.”

A heated discussion that began on the website Nextdoor has neighbors debating the legalities and dangers of alleged deer hunting in residential and conservation zones in the Larchmont area.

A resident writes that last Thursday, “Someone shot a large male deer with a bow and arrow on the Leatherstocking Trail. The details are not confirmed but I believe that the disgusting person shot the deer, removed the arrow and left it to die a horrible death. We got help from Elizabeth Paul of the Mamaroneck Town Conservation Department and the police. He died before they could shoot him. The deer was on the trail just north of the Rockland Avenue bridge next to the vernal bog.”

Another person posts that her  husband saw a buck on their front lawn with “a huge laceration and an arrow hanging out his side… A few minutes later a pick up truck drove slowly down our street as if looking for him. He came back twice to our dead end street. And another pick up truck came along later as well. Driving slowly and looking in the brook.”  She says she called the police, but “the cop acted like I was bothering him with a non issue.”

In the discussion, a Mamaroneck Village resident posts the map below, indicating bow hunting is legal in Westchester Count this time of the year.

But should it be allowed in densely populated neighborhoods? 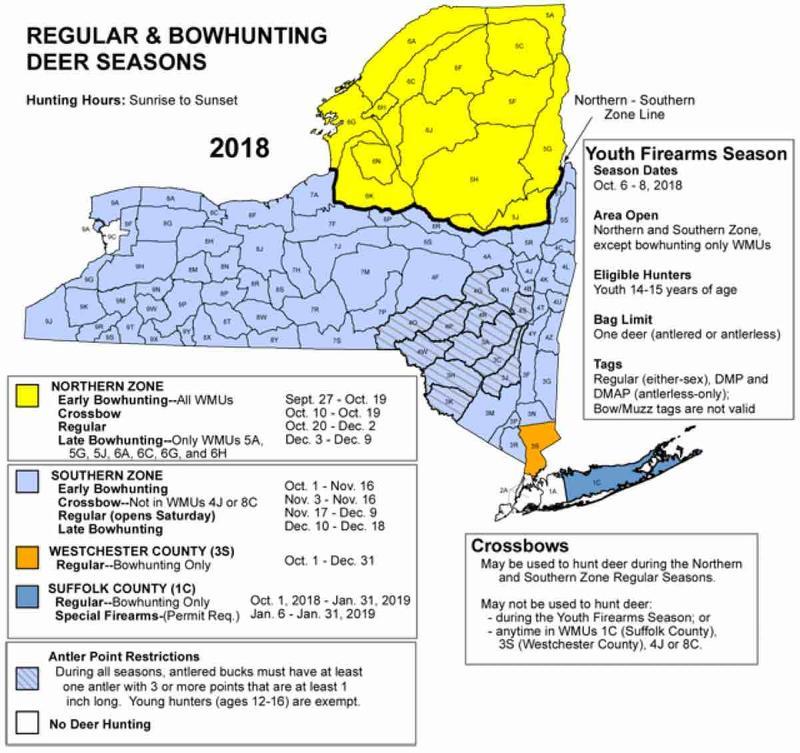 Thanks for your neighborly, informed response, J. Mark Lane.
I, for one, would welcome any responsible/humane efforts to thin out our dense deer population, especially after a buck rammed the passenger side of our car on Webster Ave near NRHS last month. As the desk officer handed over my police report, I asked how often it happens. She replied, “Well, one just got me over there!” I wonder what the overall stats are for this sort of thing?
Six weeks (and $22k!) later, after getting my fancy electric car back from the body shop, I was “seeing red” and wishing I had those antlers hanging over my fireplace. But when the shop waived my deductible (they could afford to : ) and, I realized the free loaner had brought our lease miles back down to the permitted level, the vengeful feelings passed. Maybe, I’ll go visit the Nature Study Woods off Webster instead, and leave that buck a treat. Now, about that venison offer …

Well, I see there’s an update. That’s good. As probably one of the few here with a (more or less) working knowledge of state hunting laws, I’ll add a couple of thoughts.

I highly doubt that it is “legal” in any sense to hunt “on” the Leatherstocking Trail.” I suspect that the deer found there (apparently a buck) was shot somewhere else, and ran until it collapsed there. Deer rarely drop on the spot – the two we have taken this year (upstate) died within 10-15 seconds and ran about 50 yards. Sometimes they run much further, even miles. One tries for a humane, clean shot, but it doesn’t always happen. It’s unfortunate when it doesn’t, especially if the hunter can’t find the deer to harvest the meat and the kill is wasted.

It is unusual for an arrow (never mind a bullet) to remain in a deer when shot – they usually pass through the animal. I’m somewhat skeptical of stories about deer with arrows sticking out of them. If that’s true, then either the hunter was using the wrong gear, or the shot hit a breastplate or something – meaning, s/he took a bad shot. Either way, not good.

Most hunters that I know, and I know quite a few, have their priorities in this order: safety (theirs and the public); respect for the animal (clean kill, conservation-minded hunting); obeying the hunting laws at all times. The required hunter education classes stress these values very strongly.

There are *tons* of deer around here, and many more upstate. If you have ever seen a starved deer mid-winter or early spring, or witnessed a pack of coyotes devouring a weakened deer (and I have seen both, and it’s not pretty), you might recognize that hunting, in addition to being an ancient sport, and a way to feed families), is a method of controlling the population. One of several. And more humane than many.

Most of the comments here are thoughtful – it is a legitimate concern, whether people are hunting (with anything) on or near heavily traveled trails or in populous communities. I share that concern. My kids, wife and dog walk Leatherstocking regularly. Some comments are knee-jerk, from both directions. Everyone should relax. There’s not a bunch of crazies out there shooting bows across trails or into back yards. If anyone is hunting unlawfully, and it happens but is relatively rare, the true hunters will be their biggest enemies, myself included. We will call the DEC so fast it will make your head spin. Poachers are our worst enemies, and anyone hunting unlawfully is poaching.

We have about 120 lbs of venison in our freezer right now. Hit me up if you want to try some. It’s very good eating, lean and healthy, better for you than beef. And if you’re really concerned about the humane treatment of animals harvested for their meat, yeah, check out the poultry and cattle farms that supply most of our grocers.

Wishing you all a wonderful holiday season.

lol what does liberal or conservative have to do with this? Bow and arrow hunting is done by both. And what do you mean get a job? You can have a job and be concerned about all kinds of issues. Joe needs to chill.

It is legal to hunt deer with a bow in Westchester during the season (which is now). However, to hunt on private property you have to have permission. And to retrieve a deer that ends up on private property after being shot, you have to have permission of the landowner. So I can shoot a deer with a bow on my own (Larchmont) property, and retrieve it there, or anywhere where the property owner lets me do so (assuming I have a bowhunting license, which I do). Public property can be designated no-hunting. I don’t know what Leatherstocking rules are, if any. Personally I’ve never hunted in Westchester, and have no interest in doing so.

Any snowflakes out there offended by deer hunting, I assume you are all vegans?

Joe, if you shoot arrows the way you shoot your mouth off on social media, we should all be concerned. It is not “liberal” to care about our children when macho goons like you run around playing Rambo in residential areas. Get a life, go some place else to fulfil your fantasies or even better, get some therapy.

First of all….The report of deer hunting wasn’t in Larchmont. Again with the fake news

lol oh Dave…You’re one of those guys who shoot their mouth off over the internet. Stay tough man!!!

Well you should check again. Larchmont is a Village that is located in the Town of Mamaroneck. Rockland Ave runs thru TOM and VOM.

You are correct, and a bit of New Rochelle, as well. Thanks.

Does that mean that hunting is legal anywhere in Westchester? The idea of hunting along the Leatherstocking, which is heavily used by walkers and runners, is very disturbing.

It is very disturbing. I wonder if there are any signs to warn the walker/runners/hikers? Anybody know?

GET A JOB !! There’s more important things to worry about in this world like you liberals destroying it !