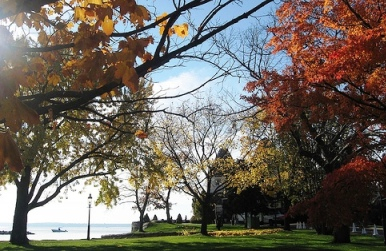 It would appear that intimation is in style in Mamaroneck. Readers Digest used to have a section called THAT’S OUTRAGEOUS – perhaps the following should be submitted, as printed in today’s Sound and Town.

(editor: Below, as submitted, is from a print edition; a direct link is not available. Courtesy, Sound and Town)

By PAIGE RENTZ
The continued controversy over the Mamaroneck Beach & Yacht Club’s long-litigated plan to build seasonal housing units had an anti climactic appearance at Tuesday night’s Board of Trustees meeting.

The board was set to discuss a resolution submitted by Trustee John Hofstetter (D) at last week’s work session that called for the board to affirm certain water front policies in the Village of Mamaroneck that would keep public lands in the public trust.

But a letter from a club attorney threatening renewed litigation against the village may have thrown a wrench into the municipal works. The club’s pending application for New York State to transfer the rights to a state-owned half-acre plot of land on Otter Creek to the club was the target of the resolution, which would have served as an official re­sponse from the Village of Mamaroneck to the New York State Office of General Services’ public comment period for the ap­plication, which officially ended on Oct. 11.

Shortly after beginning the meeting, Mayor Norman Rosenblum (R) called for an executive session to discuss with village at­torneys potential litigation with the club.

On Oct. 10, attorney Jonathan D. Lupkin of Flemming Zulack Williamson Zauderer, who represented the club in relation to some of the litigation that was to be resolved with the completion of last year’s stipulation agreement with the club, submitted a letter to Village Attorney Michael McDermott warn­ing that if the board authorized the resolution, the club would sue the village and those in­dividual board members who vote to support the resolution. “The litigation will seek sub­stantial monetary damages,” he wrote.

When the board returned and resumed the meeting, the mayor took the resolution out of order and called for action on the item. Trustee Hofstetter moved for the board to take up the resolution, but he failed to secure a second from one of this fellow trustees. “I believe there will be no second, based on ad­vice from legal counsel,” said Rosenblum, and the motion died that quickly.
For Hofstetter’s part, he feels that in all the legal and political back and forth, that what has been lost is that he had proposed a non-binding resolution. “In my mind, it’s what the village would hope to see the state do,” he said. “I don’t know how we can be held liable on a decision that another entity will ultimately have to make.”

Dan Natchez, an environmental water­front design consultant and president of the Shore Acres Property Owners Association, told the board Lupkin’s letter set a new low standard for the village. “Honest people can have honest disagreements of opinion,” he said. “There’s no reason that people can’t advocate for things that they wish and for things that they do not wish. But when you start to threaten individuals performing their public functions, you have reached a low that has never been reached before.”

Joel Sachs, an attorney for the club, said that the letter was not intended to intimidate the board or to limit anyone’s ability to write a letter as a private citizen, including Hofstetter. Instead, he said, the letter was simply to set forth the club’s legal position, which is that it would be a violation of the settlement agree­ment that was entered into by the club and the village in September 2010 for the trustees to formally oppose the club’s attempts to acquire the property. Though both club owner Lisa Rosenshein and club attorneys were present at the meeting, none spoke after the resolution died. “We were ready to get up and make a whole presentation with aerial photographs dating back to the 1920s,” Sachs said. “It’s our position we own the property, we have the title and deed, we have title insurance.”

Members of the Shore Acres association have been historically opposed to the club’s plans for expansion, and both residents including Natchez and the association’s at­torney Stephen Kass raised the question of ownership for the parcel of land when the club’s application was before the Planning Board and the Harbor & Coastal Zone Management Commission. Ultimately, the Zoning Board of Appeals voted in May that the club should not have included the parcel of land in its site plan and thus deemed it non-compliant with the village’s floor area ratio requirements.

Both the Shore Acres association and the club have filed Article 78 proceedings and notices of claim over this and other issues as the application made its way through the approval process.
The threat of further litigation from the club by Lupkin comes as the club tries to secure the rights from the state to that parcel of land, which they have claimed the club owns using deeds and surveys dating back to the 17th century, and thus fulfilling the floor area ratio requirements for the site plan.

What people seem to not understand, said Sachs, is that the club will move forward with their site plan with or without obtain­ing the half-acre plot. If they can’t meet the floor area requirements by obtaining the half-acre of land, they will simply shave off approximately 4,000 sq. ft. of construction in the current plan, he said. “The whole is­sue is like a tempest in a teapot.”
The reason for the resolution, said Hofstetter, was that he felt “residents deserve an explanation as to either why taking a position is important or why not taking a position is important and what the ramifica­tions are,” he said. “That didn’t happen, and that’s too bad.”

0 Comments
Inline Feedbacks
View all comments
Previous articleBuilding of the Week: A Taste of Coney Island
Next articleReader Mail: Does Chatsworth School Pick-up Cost Anyone Else $100?!