Reader Mail: Does Chatsworth School Pick-up Cost Anyone Else $100?! 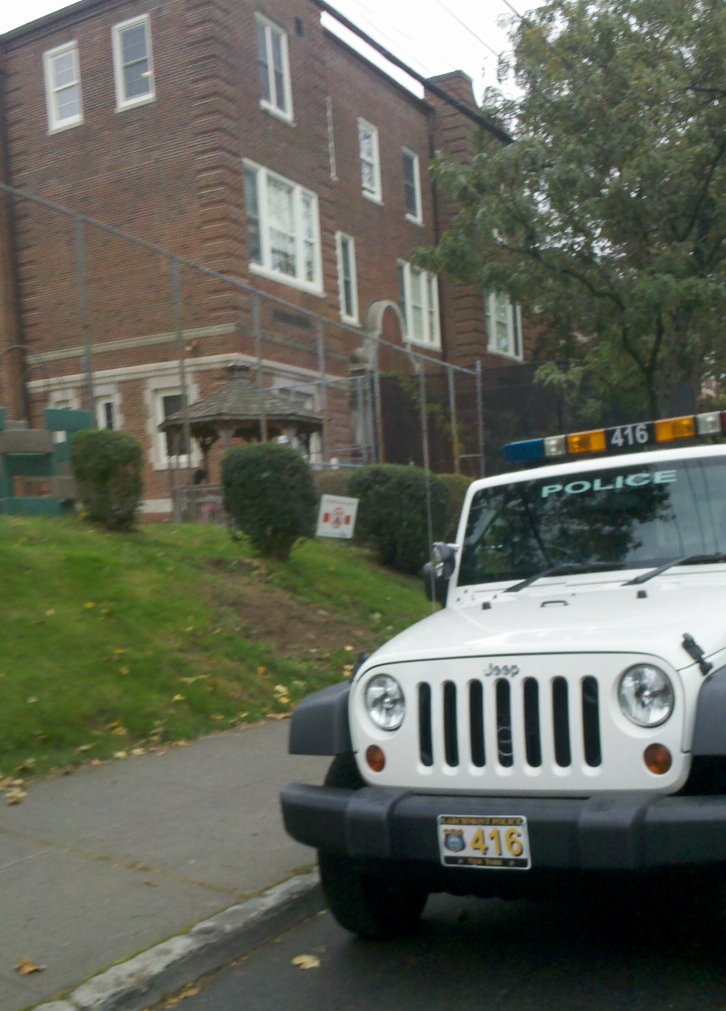 A general question for parents:  Has anyone else received an unfair/questionable parking ticket during drop-off or pick-up at Chatsworth Elementary School in Larchmont?  If so, here’s a story for you.

On Wednesday afternoon I received a $100 double-parking ticket from a police officer who seemed agitated and I WAS IN MY CAR.  He came across as scary, and my children (and I) were frightened.  Another officer, a nice woman, had driven by and noticed several parents lined up and I pointed out to her I was waiting for another woman who had her signal on to move out so I could get closer to the curb, and she continued on.

Then, another officer (male) immediately pulled up behind her as I was waiting for the woman completing her pick-up to leave.  Meanwhile, 2 of my children exited school and entered the car.  He approached the car and said:  “There’s no reason I can’t give you a ticket.”  I pointed to the woman who I really thought was leaving and that my child was walking to the car to get in.  I was behind the wheel, seatbelt on.  My older child was about to get into the car, in fact the door was ajar waiting for her.

He said, “Oh really?!”  And – and here’s where I made the mistake I believe, when I didn’t try to suck up, he took his ticket printer, aimed it at me as if it were a weapon and shot the button and said – “Yeah?!  Here you go!” in a real menacing way.  Another mom who witnessed what happened approached and tried to talk to him about it but he ignored her.

Once I was sure the kids were in the car safely, I pulled up beside him, where he parked by the light at Chatsworth & Addison Avenues.  The light was red.  I was so upset about what happened, and afraid no one would believe it, that I took my phone camera to take a picture while we were all waiting for the light.  He backed up his police vehicle as soon as he saw I was trying to take his picture.  He then motioned to me that he was going to issue another ticket (I assume because I was trying to document what happened).  I got a quick photo and when the light changed, and I drove off.

When we got home my daughter took opened her piggy bank and presented me with all of her change – about $3.17 – to help pay for the ticket.  All because of school pick-up!!!

From my experience (having sent 2 kids to chattsworth)the majority of parents are
quite careful when dropping off and picking up.
As anyone who has lived in Larchmont knows the village officers are a bunch of bullies
who often go out of their way to harass drivers
with unfair tickets and overly authoritarian attitudes.
I don’t know if they have a summons quota to produce
revenue for the village or maybe they just have too n
too much free time but their behavior is often over the
top.They need to understand that residents are not looking
to disobey laws and back off on the dragnet routine

While the officer could certainly have treated you more professionally, it sure sounds like you were breaking the law, causing traffic problems for the rest of us law abiding parents following proper pickup procedures at Chatsworth, and risking danger for your own children. It does sound like the ticket was justified.

Almost every day, my children and I are endangered (as we cross in the crosswalk) by reckless parents dropping off or picking up their children. This danger occurs especially on Forest Park Avenue near the intersection of Wendt Avenue. Cars do not stop for pedestrians (yes, even children) that are in the walkways. Parents who are just a minute or two late are just too focused on getting further along the street so that they can drop off their own child a few seconds sooner, and they just don’t look to see if people are in the crosswalks. They just plough ahead, focused on the goal of getting their kid to school. Cars routinely stop in the middle of the street, “blocking the box,” making crossing safely very difficult. Instead, cars are supposed to stop before the box, if there’s no room ahead for them to proceed through the box, instead of stopping in the box. (The box is the square area between all the crosswalks.)

I (and others) have informed the police department and the mayor that there needs to be a crossing guard at this intersection every day at the beginning of school and at the end of the day. It’s so much worse when it’s raining or any kind of bad weather. The reckless driving increases when parents are slightly late, or become late because they can’t find a parking spot as close to the school as they would like.

If a fire truck ever needed to get up to the school quickly with all these cars blocking access to the street at pickup time, it could never happen, and everyone’s safety would be endangered.

If your children are old enough to leave school without you, and you want to pick them up without ever leaving your car, then please designate your meeting place further away from the school, and meet your kids there where you will not be obstructing traffic, nor allowing your kids to cross between parked cars to where you are double parked. It will make for a safer environment for everyone. Thanks for considering it.

Yes, I have. A couple years ago I was trying to find a spot by Larchmont Ave Preschool. I took a right on beach and made a U-turn when no one was coming. Immediately, I got pulled over by an unmarked car — fair as it wasn’t legal. But what happened afterward had me shaking. My nanny and kids were in the car and this guy (cropped gray hair, by the way — sound familiar?) starts SCREAMING at me. I was so nervous I let out a very small nervous laugh and he starts going off saying, “Oh, you think this is funny, it’s a joke to you?” I ended up not getting a ticket. I can only assume he was on his way to work. But he was so over the top awful, I almost worried he wasn’t actually a police officer and had memorized my address and would come to my house or something. A day later I was still so disturbed I reported it at the Larchmont station. I started filling out paperwork and telling them what happened when suddenly a couple of the officers knew exactly who I was talking about. I believe he’s a Town of Mamaroneck officer, not positive. But SO incredibly inappropriate…and scary.

Kuddos to the second Police Officer. You were not just waiting for a car to pull out. If in fact you or anyone else where in a pick up line. You should have been at the end, not trying to cut the line off. You also allowed your children to walk through standing cars at anytime. You should have also received a ticket for recklessness. You never mentioned that your blinker was on. The Police Officer by your own account was able to pull up behind the woman you were waiting on, so could have you. The Officer was nice for not giving you a ticket for having a device in your had while driving as well as again reckless driving with children in the car. Maybe now others will read and the double parking will end. YOU ARE NOT ENTITLED TO THE ROAD!!