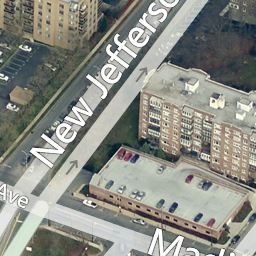 Residents of apartment buildings along North Chatsworth Avenue in Larchmont (Town of Mamaroneck), particularly those living in the six-story Carlton House at 35 N. Chatsworth Ave., are expressing concern about a plan to increase parking in the area.

The construction of The Cambium condominium near the entrance to I-95 is anticipated to bring many more cars to the area in need of parking.

Town Board will be discussing a proposal to  add an additional parking lane on the southbound side  of New Jefferson Street. It will result in three parking lanes (there are presently two) and two traffic lanes.

“This is a terrible idea and we are firmly opposed to it,” writes Robin Steiner of the Carlton House Management Company in a letter to residents there obtained by theLoop.  “The Board has indicated that it does not need our approval and plans to go forward with the project. It is imperative that we be heard.”

Plans appear to call for the narrowing of the median on New Jefferson and removal of 15 trees and 4 light poles.

A Public Hearing is planned for May 27, according to notification sent to Carlton Board President Fred Cuccia and others.

“Of great concern to residents at 16 N. Chatsworth, 21 N. Chatsworth and the Carlton House, is the fact that we have been told that one of the primary reasons for this project is the anticipated need for parking by Cambia residents,” the letter circulated at Carlton House reads.

“If that were known when the approvals were granted to the developer, the Town should have required that ample parking was created in the building plan,” it says.

Here’s an interesting conundrum… We live in a town where it is illegal to idle in front of schools/open space. How can the Board reconcile putting in unnecessary parking spots in front of the Carlton House open space, where the idling will double, with 19 net new open spots. Just throwing this in… Granted, the open space is private, but it is still open space, where seniors, children, and Town taxpayers like to enjoy the sun and being outside. The plan is still ridiculous, and I am against it. Who cares about the Cambium, I certainly don’t.

Venue now at VFW Wed at 8PM. Next to Trader Joe’s. Come to show opposition to this insanity. New Jeff doesnt need to be a dangerous parking lot

Not for nothing but why are they letting the new building to go up without enough parking? That was foolish idea. Are we going the way of New Rochelle and allowing only 1 car space per unit when a minimum of 2 are required?

This statement is filled with much baloney – New Jeff already has two lanes of parking. The same as every street around here and every street that has parking in the TOM. The Town wants to add a third lane on one street. The new “driving lanes” will be so narrow to make it unsafe for all. This is the route for Town Yard vehicles and for the FD to go to 911 calls on 95 with big fire engines. Like your car mirors? Because you’re going to lose some when the FD needs to rush down New Jeff to go to 95 calls. The streets going to be way narrower. Speaking of which the driver will exit, opening the door, into traffic.This is way dangerous for a narrow busy street anyone knows ,Not on the sidewalk, this in a dangerous situation. The 15 replaced trees will not mature enough for 10-13 years to look like the ones being chopped down. The over 65% foundation support is not real because there is no way all what is said can be accomplished for undef $200,0000. Repaving the road? moving median? Replanting 15 trees, 4 new lightpoles NO WAY this all is in the costs. NO WAY were not stupid,.Don;t be fooled by this ridiculous plan to ruin the neighborhood,

Agree with statements above, As elected officials TOM Board, listen to what your constituents say,. No change to New Jefferson, No cutting of 15 large trees, No wasting of atleast $200,000 for no reason. Use the money for improvements – not more parking

Trump at the Dump should never have been approved in the first place, and is a total disaster for the Town and all of its residents. But if it was going to be approved, then the developer should have been required to provide parking sufficient to accommodate all of its potential residents. If they have not done so, then they should be required to do so now. There is no way the Town and its residents and existing taxpayers should have to fund parking for this insane private development. On top of that, the traffic around New Jefferson and N. Chatsworth and Madison and 95 is already a nightmare. It will be much worse after this ridiculous proposal is implemented. The Town should reject it outright.

What a disaster. New Jefferson Street is already a mess. The money spent to put the absolutely un-needed “extra parking” on New Jefferson Street should be used to repair the potholes and the broken pavement – caused by 18 wheelers routinely running over the curb on the corner of New Jefferson and Chatsworth Ave. as the street is too narrow for them to make the turn with only one row of parked cars on the southbound side. The Cambium isn’t even finished yet (nor is it water-tight according to another article on this forum). AND they propose to remove the trees and the light poles – making it dark, ugly and dangerous. WHO is behind this!??!? I don’t think anyone who actually lives in the neighborhood is in favor of this proposal. Fishy….