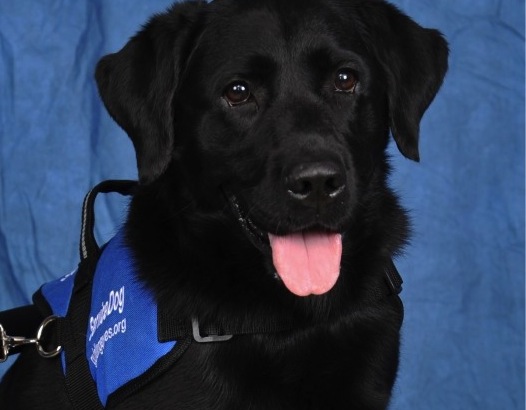 There’s a report of a possible sighting of Echo, as we reported previously, an autistic Rye child’s missing service dog, in New Rochelle, reports WABC-TV. Follow the story on twitter at #FindEcho, and Guiding Eyes for the Blind

More details about the sighting were not immediately available. Echo, a black lab, has been missing for a week.

Echo is a service dog for a young boy with autism.

“She’s changed our life. She’s not a pet, she’s a critical care giver for our son. She keeps him safe,” said Emily Fontana, the dog’s owner.

When Echo puts on her work vest, the 5-year-old black lab knows her job is to protect 5-year-old Mark Fontana.

“He’s a runner. He runs into the street. He runs to water. He loves swimming pools and he can’t swim. We have had many scares where he’s gotten out of the house,” Fontana said. “When he’s lost, he doesn’t even know that he’s lost, he’s not able to go up to someone and say, ‘My name is Mark,’ or his phone number or where he lives.”

Echo disappeared from the family’s Rye home on November 6.

Neighbors have covered the area with fliers searching for her.

Echo was donated to the Fontana family by Guiding Eyes for the Blind in Yorktown Heights, who paid the $45,000 it costs to train her.

“She wears a tether, a harness, we connect the two of them. And when I’m out with Mark and he tries to run with no command from me, her training is to automatically brace,” Fontana said.

Echo is between 50 and 55 pounds and she was wearing a red collar with tags.

If you see her take her to vet, Humane Society, really anywhere they can swipe her chip and get her back home.

“We desperately need Echo home. Mark needs Echo,” Fontana said, “Has Mark said anything to me? No. Does Mark miss her? I know he does.”