Pondering the Why for Rye

Above the rumblings to merge services in Larchmont and the Mamaronecks is a very real effort to rid the world of Rye, as published this week in the Wall Street Journal, and reprinted here. 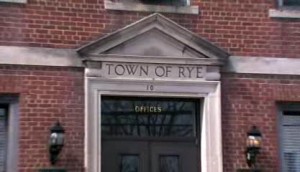 He’s leading a charge to dissolve the Town of Rye, the 350-year-old  municipality he’s headed for three years. The town is the government  version of a holding company, serving as a shell for the Westchester County villages of Port Chester and Rye Brook, and Mamaroneck’s Rye Neck section.

Despite its $3.6 million budget, the Town of Rye doesn’t provide any sanitation, health or police services; they are provided by the other municipalities and by Westchester County.

The town collects taxes, conducts property assessments and maintains two parks, a number of bridges and a court. It employs 18 people, and paid out close to $2 million in salaries and benefits last year. Mr. Carvin, a hedge-fund manager at Altima Partners in New York City, has declined the $17,000 salary his predecessor received.

“The question is: What exactly does the town of Rye do?” said Gary Zuckerman, a former Rye Brook village trustee.

This spring, the municipalities are using a $50,000 state grant to study the idea of doing away with the town.

The move comes amid a state-wide push to consolidate more than 4,000 local municipalities in an effort to pare away layers of bureaucracy that drive up costs and taxes.
The problem is particularly acute in Westchester, Rockland and Nassau counties, all among the top 10 counties with the highest property taxes in the U.S., according to an analysis of Census data by the Tax Foundation.

In 2009, then-Attorney General Andrew Cuomo proposed since-enacted legislation that allows citizens to launch a dissolution process without government approval—if they can get 10% of an area’s registered voters to sign a petition. And last year the state gave $1.3 million to local governments to study municipal dissolutions and consolidations.

The push has yet to yield many consolidations. Last year’s budget halved the state’s $11.5 million appropriation to fund efficiency grants, and next year’s budget is likely to keep the funding flat at $5  million. While at least a dozen municipalities have taken steps toward dissolution, only 38 villages have actually dissolved since 1920, according to a state report.

Last March, the village of Perrysburg in upstate New York voted to dissolve the village into the town. With 408 residents and a $290,000 annual budget, the village’s population declined by 5% and the tax base was eroding. New York’s Department of State estimates $125,000 in annual cost savings.

Currently, more than 30 local governments are looking into dissolution.

Dissolving local entities isn’t easy. Over the years, municipalities have taken on billions of dollars in debt that other local governments don’t want to assume. What’s more, leaders of municipalities that seem  prime for dissolution often have no interest in volunteering their jobs for elimination.

Mr. Carvin took office three years ago with the idea of consolidating the myriad local governments. His ideal solution would be to merge everything into the City of Rye. It split away from the town in 1942, and provides police, fire and trash services. Unlike villages, it has the power to tax residents.

“We’d go from lots of levels of government to just one and reduce  expenditures by 20%…but we couldn’t get the political support behind that,” Mr. Carvin says. So he turned to Plan B: garnering support for dissolving the Town of Rye.

Mr. Zuckerman, an attorney who moved to Rye Brook more than 25 years ago, pays taxes to New York state, Westchester County, the Blind Brook school district, the Town of Rye and the Village of Rye Brook.

“If it sounds confusing, it’s because it is,” says Mr. Zuckerman, who has been studying local layers of government for more than a decade. “We need to study what governments should provide and at what costs.”