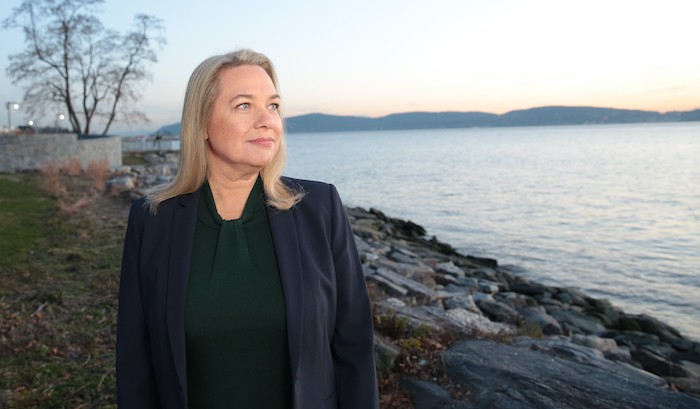 note: This poll did not come from any campaign but was distributed by the poll taker and came to the Loop via several sources.  The poll taker is known locally in Westchester and his phone number is listed on the release

A poll taken after the start of early voting puts Catherine Parker at the head of the pack in a three-way race to become the Democratic nominee for US Representative in the new 16th Congressional District in New York. 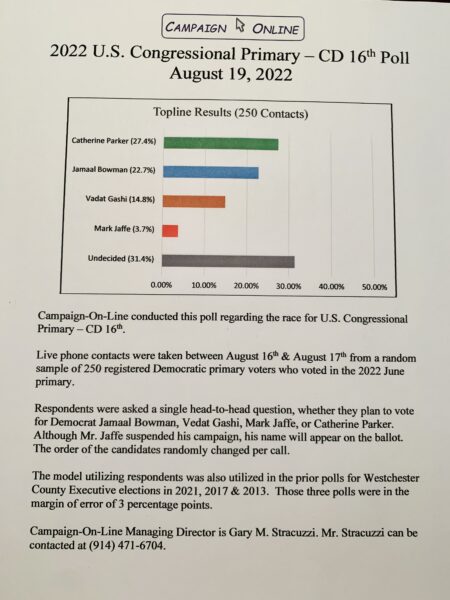 With just days till the unusual August 23rd Primary Election Day, 27.4% of Democratic respondents chose Westchester County Legislator Parker to represent the new district, with Congressman Jamaal Bowman gathering 22.7% and County Legislator Vedat Gashi getting the nod from 14.8% of the respondents.  31% remain undecided.

New York’s Congressional Districts were reconfigured in May by a state court dramatically changing the makeup of CD 16 by shifting much of the territory out of The Bronx and into southern Westchester County.  Congressman Jamaal Bowman was elected to the old CD 16 after defeating Rep. Elliot Engel in a 2020 primary.

The contest for the new CD 16 pits Bowman against longtime County Legislator Parker, and Vedat Gashi, a County Legislator who lives outside the district and had challenged Bowman under a previously discarded electoral map.

The poll was taken August 16th and 17th from a random sample of 250 registered Democratic primary voters who have cast ballots in this year’s regular June primary.  It is considered to have a margin of error of plus or minus 3 percentage points.

Pollster Gary Stracuzzi says respondents were asked a single head-to-head question, whether they planned to vote for Bowman, Gashi, Parker or Mark Jaffe, who has suspended his campaign but remains on the ballot.  Stracuzzi says his firm used the same model for Westchester County Executive elections in 2021, 2017, and 2013.  The firm has a positive accuracy record stretching over the past eight election cycles.

Asked if he was surprised by the results, Stracuzzi said “60 per-cent of the people who are going to vote are going to be women and there is only one woman on the ballot.”

This is a puzzling article. The pollster says “The poll was taken …from a random sample of 250 registered Democratic primary voters who have cast ballots in this year’s regular June primary.”

That primary was STATEWIDE, so this is impossible. With a random sample, all or almost all of the voters he questioned would have lived in Queens, or Troy, or Schenectady. Something isn’t adding up here.

250 registered Democrats within NY16 who voted in the June primary. This gauges the most likely voters.

Both the June and August primaries in NY are statewide. In June we voted for Gov, as well as Assembly, and for some of us like Mamaroneck local (trustees). The August primary is for State Senate and Congress. The split is because the Republican lawsuit challenging the initial maps only contested maps for Congress and State Senate.

when you ran for Rye City Council, you no doubt became familiar w the polling process. We do not publish anything but facts.

In addition, we do not publish or “take down” any story based on a reader’s political preferences. Perhaps it is you that is spreading misinformation.

theLoop stands by its story.

Hi Debra, this “poll” must have been paid for by the Parker campaign. Can you please share the questions that were asked and the methodology used? Legitimate polls always include that. If not you should probably take this down.

According to pollster Gary Stracuzzi it is a poll paid by a PAC not affiliated with any of the campaigns and strictly for informational purposes. According to Stracuzzi participants were only asked which candidate for whom they were voting .

I have an email from Gary Stracuzzi that says that he has not spoken to “that publication” and that he and his firm did not release the poll to the media. So where are you getting this information? You know it’s absolutely fake news, right?

If that comment wasn’t so misinformed, it would be funny.

By law, a PAC exists to raise/spend money to elect and defeat candidates. That’s why a PAC exists – not for unbiased information-gathering.

Don’t readers deserve to know the name of the PAC and who funds it? If you can update the article that would be super awesome.

Also I found online that Stracuzzi is not just a pollster, he was also Treasurer of the Westchester Democratic committee.

Hi Jake:
We have posted the poll above.