Burglaries in Scarsdale…and you thought your children were badly behaved. Then there’s the wildlife… 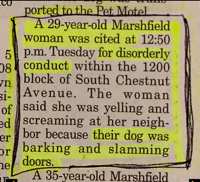 A 38 year-old New Rochelle man walking near 1 Library Plaza overheard a group behind him say “let’s get his backpack.”  The victim reports that 7-8 males surrounded him and he was punched by one holding what appeared to be a gun.  The group took the victim’s backpack and ran away.  Police arrested a 16 year-old male from Yonkers, along with two 13 year-olds (one from White Plains and one from Mount Vernon) and one 15 year-old from Yonkers.  The 13 year-old White Plains teen had an imitation gun and mask.  One Library Plaza.  February 19

Three men ages 24, 23 and 26 from Mount Vernon, Pelham andYonkers, respectively, were arrested and charged in connection with a January 20th  assault in front of 33 Lincoln Avenue.   At that time, a verbal dispute in the street degenerated to 8-10 men who had been
loitering in the area, attacking the victim and beating him with shovels.  The victim also was stabbed in back three times.  33 Lincoln Avenue.

An Apple macbook laptop was reported stolen from a vehicle.  21 Fountain Place.  February 23

A 53 year-old New Rochelle man was arrested during the early morning hours of 2/8 and charged with Driving While Intoxicated.  He was released on his own recognizance.

A Mamaroneck Town resident reported on 2/8 that sometime between 10:30 and 12:00 someone entered her vehicle, which was parked and possibly unlocked on Palmer Ave and removed property valued at $500.

A Mamaroneck Town man was arrested on 2/12, and charged with operating with a suspended license after he was observed operating his vehicle on Boston Post Rd. The operator was released on the issuance of an appearance ticket.

A nineteen-year-old Mamaroneck Town resident was arrested on 2/13 and charged with misdemeanor possession of marijuana subsequent to a vehicle and traffic law stop.

A man entered his parent’s home on Henry Street and found it had been burglarized. The side garage door was broken. Stolen items have yet to be recorded.  February 10

Report of attack by coyote on women and dogs the night of February 11th as they were out for a walk.  No injuries reported.  February 15

A nurse at the Rye Hospital Center reported that a diabetic female was missing.  She left the premises, without the knowledge of hospital staff.  February 16

A home on was burglarized sometime between February 19th and February 22nd, while the owners were away on vacation.  The homeowner’s mother, who was checking on the house while her daughter was away, discovered a broken rear door on the 22nd and called police.  The second floor master bedroom was ransacked, and it is unknown at this time what property was taken.  There was no alarm system in the house.  The matter is under investigation.

Vacationing homeowners discovered their home on had been burglarized sometime between February 17th and February 23rd.  A rear basement door had been forcibly opened, it appears, with a prying tool.  Thieves appeared to target the master bedroom, with closets and dressers rummaged through.  The only missing item reported was an iMac computer.  There was no alarm system and no one had been watching the house while the owners were away.  The matter is under investigation.

An employee of the Weinberg Nature Center on Mamaroneck Road reported a headless rabbit on the property.  Officers assured the man that the rabbit was not a victim of satanic ritual or cruelty, as it may have appeared, but, rather, most likely eaten by another animal.&
nbsp; February 19

A Richelieu Road resident complained that the Scarsdale Inquirer did not report a previous incident involving her dog being bitten by another dog, to her liking.  She was advised to contact the Inquirer directly.  February 19

A Griffin Avenue resident complained that the entrance gate to her driveway was damaged.  Her housekeeper observed a USPS truck hit the gate on February 16, and drive away.  Upon further investigation with the Heathcote post office, the driver, a 24-year old New Rochelle resident, admitted that he had hit the gate due to icy road conditions.  A claim will be filed with the post office for repair of the damages.

A 65-year old Harvest Drive resident reported that abaseball was thrown through his front window at 10:00 PM on February 18.  The resident, not having any young children nor any grievances with anyone, was unsure as to who the culprit was.  There was no evidence of trespassing in the snow or front walkway.

A 23-year old employee of Scarsdale Hardware was in the middle of Scarsdale Avenue, directing traffic for a truck backing into aloading zone, when he was struck by a 2009 Nissan attempting to pass the truck.  The employee was struck on his right arm by the driver’s side mirror.  EMS arrived, but the employee refused treatment. The driver of the Nissan, a 53-year old New Rochelle resident, was issued a ticket.  February 18

A 26 inch men’s bicycle was reported stolen from a shed at a residence on Well House Lane.  There was no sign of forced entry.  February 17

HARASSMENT IN THE 2ND DEGREE

Two men were involved in a shoving match near the Mrs.Green’s market on 2453 Boston Post Road. The one man, 62, alleged that the other man, 49, shoved him.  The aggressor was arrested for harassment and released on his own recognizance.  February 22

A woman reported that her car, which was parked at Equinox Gym on Boston Post Road, was keyed on the passenger side.  February 18

UNAUTHORIZED USE OF VEHICLE

A police officer noticed three youths in a car making an improper turn onto Bishop Avenue around 2:30 AM. Several minutes later, the officer noticed the car parked on Maple Avenue.  He contacted the station to have them run a plate check so that the owner could be contacted.  The owner, a woman residing in Crompound,NY, indicated that her car was missin
g and her son was not at home.  After the car was impounded, the officer located the woman’s son at the train station and arrested him for driving without a license.  The son was later released to his mother. February 19

An employee of the Dunkin’ Donuts on Mamaroneck Avenue called police to report an intoxicated woman in the restaurant.  EMS was also contacted and took the woman to Sound Shore Medical Center for observation.  February 19

A local woman complained she had been receiving unwanted letters of a sexual nature. February 19

Officers arrested a man who had a bench warrant for riding his bicycle on the sidewalk.  He was held for arraignment at the station. February 19

A 34-year old local man was pulled over on 900 Old Post Road for speeding. Police suspected DWI and arrested him.  The man was administered a Datamaster test and charged with two counts of DWI.  February 20

The Town of Mamaroneck called out a crime that had occurred in their jurisdiction.  An 11 year-old boy said someone stole his bike on 275 Mamaroneck Avenue.   A person fitting the boy’s description of the suspect, a 37-year old local man, was spotted riding the bike on the intersection between Halstead and Ward Avenues.  The man was arrested and charged with petty larceny and criminal possession of stolen property.  February 20