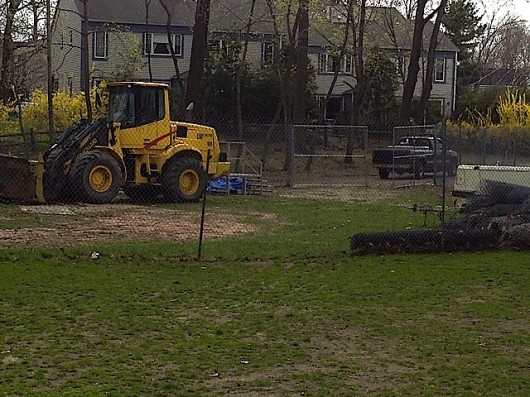 As we have previously reported, in a story that received a comment from Larchmont’s mayor and coverage from NYC media, the Palmer Avenue Streetscape project has been further delayed, leaving residents of the Pine Brook section of Larchmont with an enormous eyesore, and less play area for kids.

Construction equipment waiting for the project to begin has been stored on a section of a popular playground at Palmer Avenue and Pine Brook Drive.

As Pine Brook Association Board Vice President President Ralph Engel writes, ” The Village, the Pine Brook Association and a large number of contributors gave a substantial amount of money to renovate the Pine Brook Park playground just last year. As one who was heavily involved with that project I can guarantee you that no one told me, or the others who were also heavily involved, that the rest of the park would be turned into a highly unattractive, perpetual construction site, that the T-Ball field in the park would be rendered useless for this season, if not destroyed, and that the very attractive new playground would be next to very unattractive construction equipment, etc., for months and months and months.”

Work is now scheduled to begin no earlier than May 28, according to the Village Web site.

0 Comments
Inline Feedbacks
View all comments
Previous articleWhere Not to Eat in NYC
Next articleComing Up: Support YA authors and Your Local Bookstore May 18