A local woman says she has 3000 signatures from people who want to “preserve the trees on Palmer Avenue” following the Streetscape debacle in Larchmont.

Monthly meetings of the Larchmont Board of Trustees have included much debate on the issue. the next Board meeting is scheduled for Oct. 21.

“The mayor and board claim the 17 tress that have already been cut on Palmer were unhealthy and interfering with electrical wires,” writes Monica Hoffmann, “however, Con Ed knows nothing about this project and is not concerned at all. They said that they need extensive permission to even cut a tree.”

Hoffmann says she filed a Freedom of Information (FOI) request to the Village for written documentation that the trees are diseased, but that she received nothing.

We have asked Larchmont Mayor Anne McAndrews to respond.

Business owners, like Judy Graham, who owns Pink on Palmer and two other stores, support the idea removing the half cut trees and replacing them with planters.

In August, Mayor McAndrews told theLoop, “About fifteen trees, all in bad condition, were cut down, leaving high trunks and exposing overhead wires.  (The trunks were left high to facilitate the removing of the roots.)  Since the planting season for the new trees is the Fall, those stumps will be removed and replaced with flower boxes as much as possible, given the complications caused by underground gas lines.”

The project received a grant of over $800,000 from the State Department of Transportation, and was put out to bid in the summer of 2012.  Work began last Spring and was to continue for five months. 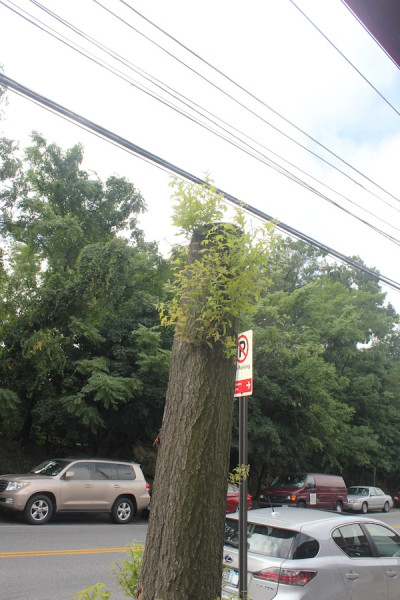