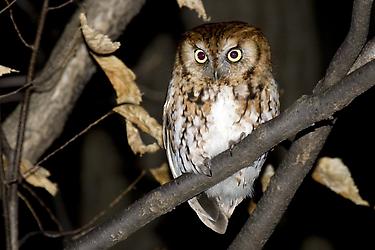 Owl prowlers are also known to frequent the area.

Friday night, leading a group of about 80 owl prowlers, Jim Previdi, a member of Rockland Audubon Society played a tape of a Screech Owl in an effort to drawn them out to where they could be seen.

“We quickly got a response to the Screech Owl tape as we started down the road towards the Battlefield’s entrance, but could not get the birds to come in,”  said Previdi.

Great Horned Owls at the Battlefield can be heard almost every evening at this time of year. It is the mating season and the owls call back and forth to one another. These are large birds, usually 18” – 25” tall with a 3-5 foot wingspan. The Screech Owls are much smaller; about 8” tall with a wing span just under 2 feet.

When we reached the gate,” said Previdi, “we switched to the Great Horned call, initially without success, but as we headed back up the road we began to hear both Screech and Great Horned calling, but we could not seem to get any looks.”

“Finally, reaching the toll booth area, I played the Screech Owl tape and one came in for all to see. That was a hard won owl.” Previdi recounted.