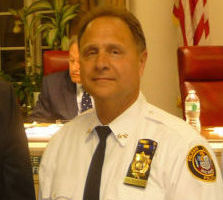 At a time when police nationally are scrutinized in their dealings with the public, Pelham Manor Police Chief Alfred Mosiello is being investigated for what have been labelled ” inappropriate emails,” according to The Journal News.

“Former colleagues and some recently retired officers familiar with the probe said the emails were racist in nature and had been forwarded by the chief using his personal email,” according to reports.

Mosiello, is a 34-year veteran of the department, who was promoted to Chief in 2007. His son, Alfred, Jr., is also a police officer in Pelham Manor. The Senior Mosiello is now on leave from the Department.

Take home a furry friend that needs you!
Read more